The Hearthstone expansion, Curse of Naxxramas, brought in new cards for the players to play around with. If you play Casual these days, you will see so many interesting new deck concepts. The Ranked Play environment is a different story--it is predominantly the Hunter's playground. I started this season with Rogue because I just wanted to play with any class that’s not Hunter, and Rogue is a good class to play in the current meta.

This class has some of the best cheap removals out there in the form of [card]Eviscerate[/card] and [card]Backstab[/card]. [card]Deadly Poison[/card] gives you a really cheap Fiery War Axe, (provided you have your weapon on) while [card]Sap[/card] gives you that pseudo-removal that could make or break games.

This Tempo Rogue deck helped me get to Rank 5 during the first week of this season. The goal of this deck is to maintain board control as you chip off your opponent's face.  It’s especially geared towards rush decks like the new Hunter archetypes, and it has decent matchups against the anti-hunter meta. I'll elaborate more under the Matchups section.

[card]Backstab[/card] – A staple for Rogue decks. 2 damage for zero mana is great and it helps in Combos too.

[card]Deadly Poison[/card] – This turns your 1/2 dagger into a 3/2 and is great for removing your opponent’s small minions.

[card]Eviscerate[/card] – Another staple.  4 damage for 2 mana is good value

[card]Sap[/card] - Great tempo card/pseudo-removal.  This is useful in removing those pesky taunts for lethal or for stalling your opponent while you pick up pace.

[card]Fan of Knives[/card] – When this spell is used with Bloodmage Thalnos and/or Azure Drake, this is a good removal that comes with card draw.

[card]Undertaker[/card] - He is solid 1/2 for a 1 drop and has the potential to snowball.  It forces your opponent to use removal spells just to prevent it from growing. Eaglehorn Bow usually loses a charge early on because of this guy.

[card]Bloodmage Thalnos[/card] – This is perfect for combo-ing with Eviscerate.  Note that he also has deathrattle, which would (again) be good for your Undertaker. The deathrattle card draw is a good addition.

[card]Loot Hoarder[/card] – Deathrattle with card draw. You can imagine how big Undertaker is getting by now.

[card]Harvest Golem[/card] – This is probably one of the best cards in the game.  Solid 2/3 for 3 mana, not to mention its deathrattle ability to leave a 2/1 golem behind.  This minion is great for crowd control.

[card]Defender of Argus[/card] – He destroys the momentum for aggro decks. As somebody who mains Hunter, I hated it whenever he shows up at the time that I wanted to clear 2HP minions with Explosive Trap.

[card]Gnomish Inventor[/card] - Card-draw minion that mostly trades 2-for-1 with the smaller minions.

[card]Azure Drake[/card] – A good 4/4 minion that gives you card draw.  The spell damage +1 is great for your removals.

[card]Loatheb[/card] - He rains on anyone's parade and is almost a guaranteed tempo by himself. His battlecry almost always prevents his removal on the next turn, thus making him available to help you clear the board or contribute a hefty 5 points of damage to your opponent.

[card]Sludge Belcher[/card] - This is probably the most annoying taunt nowadays.  It is not easy to remove and he slows your opponent down a bit.

[card]Argent Commander[/card] – He is perfect for taking out anyone at 4 hp and below, and also helps in finishing the late game.  His Divine Shield makes him hard to remove.

[card]The Black Knight[/card] – Taunts will slow you down so this guy will help you soldier on. Majority of Hunters use Houndmaster these days that’s why this minion is valuable.  Its 4/5 body is not bad either. 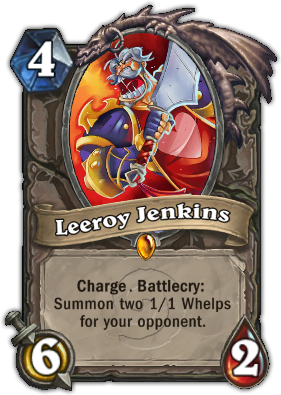 You may switch some of the small minions for [card]Leeroy Jenkins[/card] or [card]Ragnaros the Firelord[/card] for that additional burst. For more control, you can opt for [card]Kel'Thuzad[/card].

Some would say that [card]Zombie Chow[/card] is a better choice for early board control.  I prefer not to use him because of the 5 health that he gives to your opponent when he dies.

An [card]Assassin's Blade[/card] or [card]Assassinate[/card] would be good for additional removals but I think this is more of a matter of preference.

The gameplay is pretty straight-forward.  Control the board and go for the face when you can. Dominate the board and snowball your way to victory. 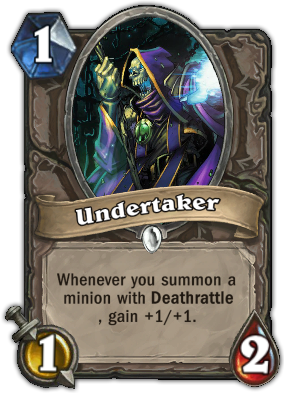 Important: When playing against control builds, you have to focus on rushing them down as soon as possible. As the game stretches on, they would catch up and your odds of winning would greatly reduce.

Hunter – You just have to make sure you control the board and you’ll be fine.  Don’t worry so much about the traps because you have lots of small minions to trigger them.  Midrange builds that run Savannah are made manageable by Sap.

Warlock – You are favored against Zoo, as with any other rush deck.  Handlock is a different case as you can be overwhelmed by Giants if you’re not careful. The weaker burst potential of this deck may cost you the match but there aren't too many Handlocks nowadays thanks to Hunter.

Warrior – Control may be too slow to stop you since most them are now geared towards Hunter (1 damage removals) but you have to rush him down before it's too late.  Those with Brawl are the ones that stand a chance.  Rush Warriors usually burn out against you.

Paladin – Any variant with an Equality combo (with Wild Pyromancer or Consecrate) may ruin you. Luckily most of your minions have deathrattle, leaving you with a few small minions at least.  Play it right and you can win this, plus, you have Loatheb.

Rogue – Miracle tends to be slow and the number of taunts that you have messes up the Leeroy+Shadowstep combo.  BSR would be slightly unfavored because it is geared towards control matchups (your minions would love to have those Bananas).

Priest – Generally favorable against Priest. The most obvious threat is the Zombie Chow variant, as his early board presence can rival yours.  Watch out for mass removals and get Loatheb in there.

Mage – I initially thought this would be a bad matchup for this deck but it turns out that it can suppress the board presence enough to prevent the spells from causing too much of an impact. Just watch out for AOEs and you’re golden.  Freeze Mage can destroy you so make sure you have that Sap ready for Doomsayer.  As usual Loatheb has a role to play here.

Druid – 50/50 I’d say.  Get ready with your Sap for the ramp variants.  If you play it right then you should finish the game before the big guys show up.  Naxx Druid can give you a hard time though.

Shaman – You got this; just make sure you clear his board.  The only problem here is Feral Spirit, but by the time they come out you should have enough spells or minions on board to clear it.  Sea Giant is popular with Shamans nowadays. Sap him, clear the board, and hopefully finish the game before he comes back.

Recognizing the metagame and adjusting to it will get you your winning streak stars faster. Rogue is one of the best classes that gracefully adapts to change. It's about time that the hunters out there should get other playmates.
Gosu “GosuGamers” Gamers
Share Tweet
0 people reacted to this post