A few words from the GosuCrew

This week's homebrew corner will be a bit special. After several editions of featuring community submissions, this time we look at the weird stuff the pros are playing, and not just for fun but in competitive environment as well.

Below are two decks that feature [card]Malygos[/card], a legendary of extreme unpopularity. A +5 spellpower Dragon, Malygos sounds like a natural choice for spell heavy decks but at 9 mana, he is usually heavily disregarded by everyone. However, there are still decks that dare use, even if they're not the definition of cookie cutter.

For future editions, if you have a cool deck idea and want it analyzed and 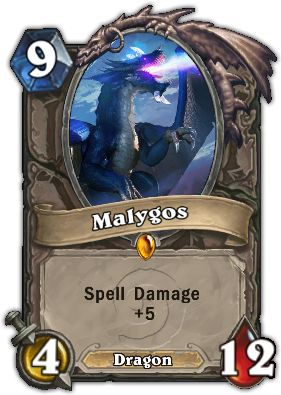 maybe even improved by professional Hearthstone players please, share it with us! Create a deck and post it in the Homebrew dedicated thread, or mail it to [email protected]. Every week, we'll select one cool submission, feature in on the website and promote it through all GosuGamers and DKMR social channels, giving the deck creator the exposure he or she deserves.

We'll wait for you submission. Till next week!

At this point of the metagame, Druid builds are pretty much set. More defensive players run the “Watcher” version where [card]Ancient Watcher[/card]s are made usable through taunt and silence effects. More aggressive players run token Druids, relying on [card]Violet Teacher[/card] and [card]Power of the Wild[/card] to rush down the opponent. The end of the last and the start of the current season also saw the resurgence of fountain Druids (a.k.a. “ramps”), popularized by renowned constructed players Savjz and Kolento.

The three builds differ greatly from one another and it’s easy to identify them from the first few turns. If you see [card]Argent Squire[/card] it’s tokens. If an [card]Ancient Watcher[/card] is put down at some point it’s obviously Watchers. If a [card]Wild Growth[/card] appears, it’s Savjz ramp. Once the build is identified, players can react accordingly and play out the rest of the series without having to worry about wild surprises.

That is where Tides’ Malygos Druid has the edge. The deck runs a combination of underused spells and minions and is very unpredictable. Not many players expect to see [card]Bite[/card], double [card]Starfall[/card], [card]Harrison Jones[/card] or double [card]Sunwalker[/card]. And that’s just for the mid-game – later you’ve got Alexstrasza and, of course, Malygos.

The cards and their place in the curve

Until Malygos is out, the deck behaves like a defensive ramp, using [card]Wild Growth[/card] to speed up the mana while having [card]Claw[/card], [card]Wrath[/card] and [card]Wild Pyromancer[/card] to clear early game threats.

The mid of the curve combines board control mechanics with card draw. Two copies of [card]Swipe[/card] and [card]Starfall[/card] act as the board sweepers which work wonders against mid-range or aggressive decks like Murlocs, Zoo or Tokens. Alternatively, both cards can be used to destroy high-health minions like [card]Chillwind Yeti[/card]s or [card]Cairne Bloodhoof[/card] so the deck is not completely naked against slower opponents either.

The card draw comes in the form of two [card]Azure Drake[/card]s and a [card]Gadgetzan Auctioneer[/card] ([card]Harrison Jones[/card] is an additional draw sources against weapon wielders). Those minions are needed to draw into the cards necessary to finish off the opponent, namely the two dragons, Ragnaros and the two [card]Moonfire[/card]s.

The late-game curve for this deck is a bit heavier than others (except the ramp version). Where watcher and token Druids stop at [card]Ancient of Lore[/card] and only have a [card]Ragnaros the Firelord[/card] or [card]Cenarius[/card] beyond that, here we have [card]Alexstrasza[/card] and [card]Malygos[/card], which are two of the pieces of the combo.

What’s the purpose of those dragons? Because this deck likes mid-range minions like Yetis, [card]Druid of the Claw[/card] or Cairne and is entirely defensive, its opponent will lose hardly any life until the late game. Alexstrasza is there to bring him down to 15, which is not that far away from death.

[card]Malygos[/card] is there to synergize with [card]Moonfire[/card] and blow up opponent’s life totals instantly. Usually terrible cards by themselves, Maly’d Moonfires deal 12 damage for 0 mana and are one of the few spells in Druid’s arsenal which can deal damage directly to a player (the others being [card]Swipe[/card] and [card]Starfire[/card]).

If you haven’t killed your opponent with your Ancients, Drakes or Sunwalkers and he’s above 15, you need to draw into your dragon/Moonfire combo: 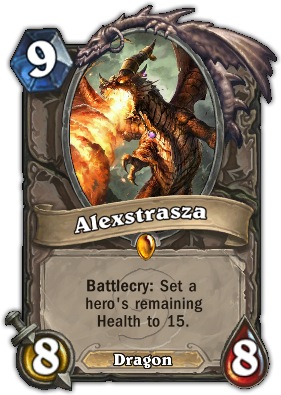 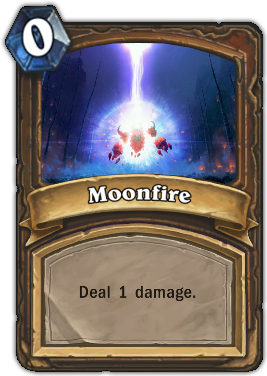 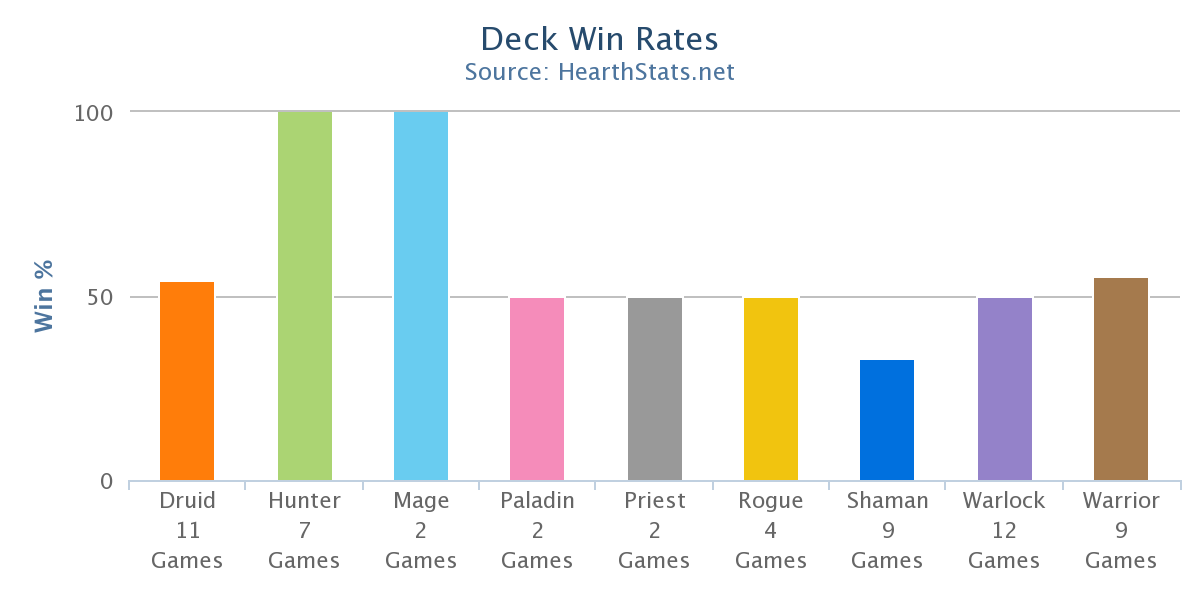 When constructing a spell intensive deck, Shaman is a natural class to choose. Thrall has one of the richest collections of low-mana spells and consequently is a class that can explode with bursts of damage, bringing the opponents to an unexpected end.

Standard Shamans use this class trait to control board and play the mid-range control playstyle but DKMR’s Zeus is different. Although he’ll still want to see a clear board on the other side, this spell-heavy deck relies on Malygos and an array of lightning spells for a quick burn down in the late game. Monored players from Magic: The Gathering will absolutely love this.

The art of burn

From there on, most of the deck is fairly standard: we have board presence cards like [card]Feral Spirit[/card] and [card]Unbound Elemental[/card], draw mechanics, hard removals and board sweepers, just like any other Shaman. Where it gets different (besides the Frost Shocks) is the two [card]Ancient Mage[/card]s and Malygos at the end.

Similar to the Malygos Druid from above, the Zeus also needs to have certain cards in hand in order to burst down the opponent and that’s why it has Gadgetzan Auctioneer (excellent in this deck due to the seven one-mana spells in the deck) – the goblin is a great deck filterer and will dig for Malygos if he’s not available in hand.

Unlike the Druid, the Zeus is able to go both on the offensive and the defensive, which is helpful because it runs no Alexstrasza. The early and mid game must be played like normal mid-range Shaman – establish board control and pressure with totems and Elementals. If you’re against an aggro deck, sit back instead and use your many removals to stabilize and build towards a solid late game. 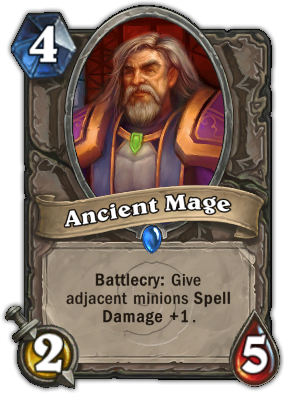 An important card for the Zeus is [card]Ancient Mage[/card], a minion rarely seen in competitive decks, if at all. Due to his battlecry effect, the Mage doesn't have to be on the board to give the spellpower bonus (unlike Wrath of Air Totem, Azure Drake or Bloodmage Thalnos) and his role is to lure the opponent into trades he doesn't want to make by giving minions spell power. It can be used on totems which can then bait removals, or on fat creatures like Fire Elemental to draw extra attention to it and make it absolutely obligatory for the opponent to commit resources to killing them. If played between two minions, the Ancient Mage gives you a total of +2 spellpower, so he'll also set up devastating Lightning Storms or point removals that'll burn through any taunter or other fat minion.

Remember - it's all about eating curving your damage, so any time you force a Rogue to attack into your 1/1 spellpowered totem it's a win for you, especially if you had actually got to use the spellpower bonus.

Another way that Zeus is different than Tide’s Druid is there is no one-two punch component (i.e. no Alexstrasza + Malygos + double Moonfire). That’s why, a solid board position must be established and the opponent must be chipped down before Malygos hits the field – he will be able to dish out a lot of damage but he’ll need help from Fire Elementals and Ancient Mages to get the job done.

I have Malygos, what now?

As it’s always the case with Shaman, careful calculation is needed to execute this build. Try to curve your damage in the most efficient way so that once Malygos is in play, it takes you as few spells as possible to burn down the opponent. Although they’re an easy minion removal, it is best to save the Frost Shocks and Lightning Bolts for Malygos as much as possible and use alternative minion removal methods to deal with early and mid game threats (Earthshock, Rockbiter, Hex, Lightning Storm and totem trades with the help of Flametongue Totem). This is needed because of the 1-mana spells, only Frost Shock and Lightning bolt can be spellpowered and be directed at enemy’s face.

So how much damage can Malygos actually dish out? If all Frost Shocks and Lightning Bolts are in hand, this is 28 damage to the face with spells only (add the 4 from Malygos and it’s 32). If there's a taunt up, you can add [card]Lava Burst[/card] for a total of 38. Casual.

Of course, these are ideal scenarios and you’ll probably have half of your 1-mana spells and Lava Burst, which is still the overwhelming 22 damage minimum (26 if counting the Malygos attack). Keep in mind that if played on T10, Malygos leaves one mana open, which means that you can immediately hit for 6 with a Frost Shock or for 8 with a Lightning Bolt. 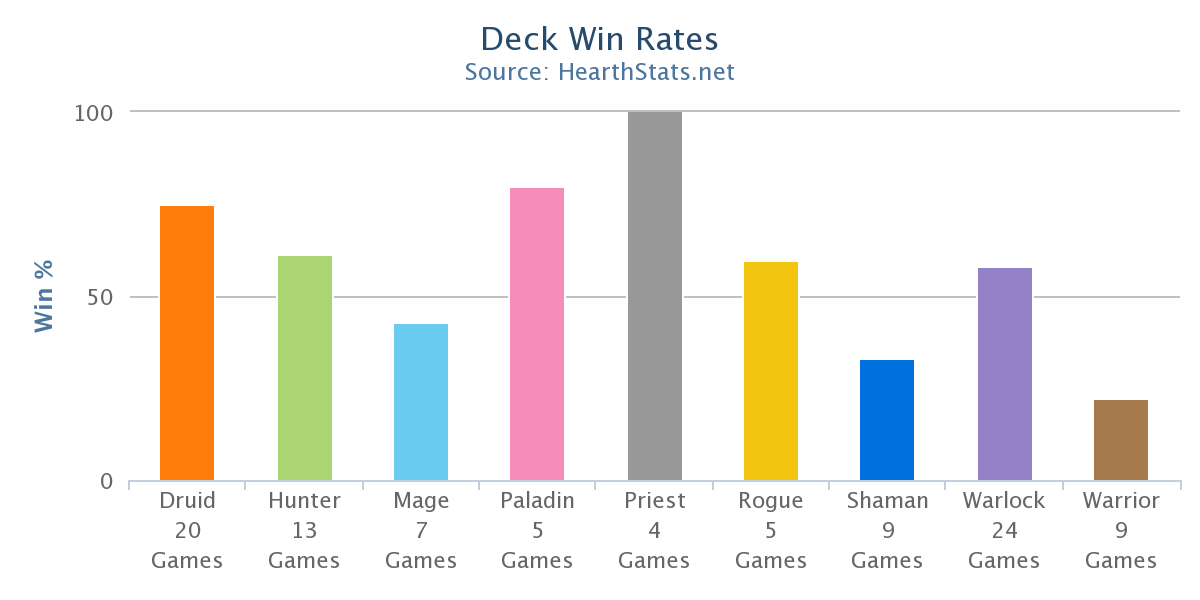