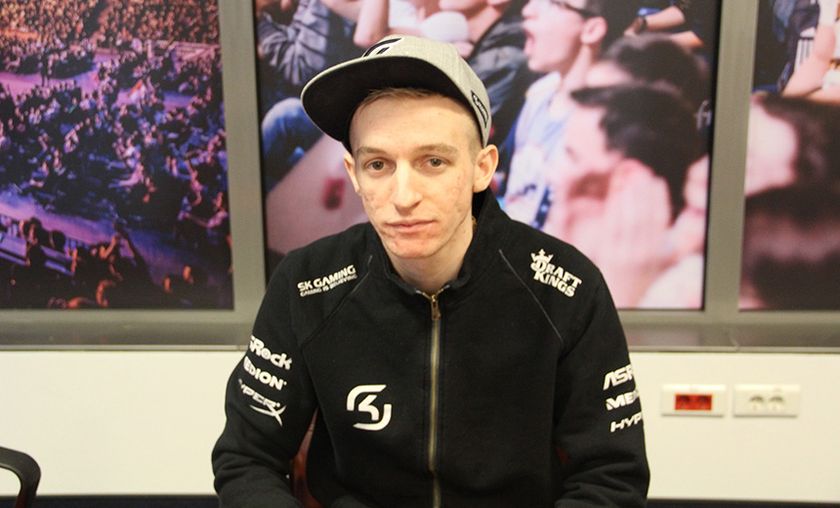 So, we're on the first day of Tavern Tales, and you apparently won your first match in ten minutes. Who did you play?

You played Zoo, right? Sometimes it happens. What did he play?

Freakeh: It was pretty nice. I think I won on turn five or six every game.

Did you bring an aggro line-up?

Not really, but my Zoo is pretty good.

"SK gave us a chance and we proved them right."

So, I want to talk a bit about SK Gaming, obviously. It's a team I've been following for a while because it's one of those legendary esports brands. It was supposed to be big when it founded a Hearthstone roster, but in the end of 2014 it kind of fell out. Numberguy went into inactivity, RenieHour as well and then they signed you guys, the core Swedish quartet with you, Airbrushed, MartinCreek and Spo and later Powder. The team has been on the rise for some time now, so how is life in the SK environment? How do you operate to become good and leading again?

To be in SK Gaming is actually amazing. It really changed my life. I was in Team Darkstar before and they didn't really provide what we needed, so we left that team and were looking around. We saw that SK didn't really have that many players, so we contacted them and it all turned out well after that. They gave us a chance and we proved them right.

They set up a team house as well, so you're living in one?

This is one of the few team houses in Hearthstone, although they are pretty common in other esports. Do you think that the game actually requires for a team to be in a team house to create a good practice environment?

I think it helps a lot, definitely. It doesn't really need it as much as maybe other games do, but it still helps a lot. I think you take the game more serious when you're actually with someone and talking and doing everything together than just sitting on Skype and playing.

What do you think are the key components that make a team house environment strong in Hearthstone? I'm asking because I will move on to talking about the Archon experiment and how it's not really working well for them, at least from what I see. But you guys seem to be really good.

Yeah, but I mean, we have known each other for a long time before we were on SK, so maybe that's why as well. We're like a family, we do everything for each other and we help each other practise. We're practically like family.

So, you're saying if you weren't so close it wouldn't be such a good place?

Probably not at the start, but when you get to know each other better and so on it should be, I think.

One other thing that Archon is not working well in terms of their team house, because they set up, they had big plans and some of the best players in the world…

...Yeah but every player doesn't go well with every other player, so it's... I don't know, I think it's all about how you connect with people.

"Me and Orange have very similar playstyles, we practice a lot and we always think the same."

Do you think that like a father figure or a manager is needed in these environments who can just solve conflicts or, you know, oversee you guys, like are you doing well workwise and relationship wise?

Yeah, I think that's needed. It helps a lot.

Who does that, is it Spo in SK?

Alright, what do you, if you look at your teammates, get away from them in terms of skills that you're missing? Because you guys have a big roster now, AKAWonder is pretty much on the rise and you guys are from the old school days from Swedish esports.

I would say that all of us have kind of different playstyles and that just makes it better, because then everyone comes up with ideas that the other ones didn't think about and yeah, that makes it a lot better to practise. You really think about everything then.

Who would you say is the diametrical opposite of you in terms of playstyle?

I think it's Zetalot. I'm more kind of an aggro player and he's more control.

Priest forever! (laughs) Yeah, they call him the Priest god, what do you think makes Zetalot the best Priest player in the world? What does he do that others don't?

He puts a lot of time into Priest. Basically all his time. That's the only thing he plays and has been playing for I don't know how long. I think he has like 20,000 wins with Priest. He told me something like that.

Speaking of practice partners, you are known to be one of Orange's. He attributed his SeatStory Cup III win to you because of the practice. What do you think you give Orange, what is he lacking as a player? Did you feel that you taught him, basically, to become good?

I think me and Orange have a lot of the same playstyle actually, so we practised a lot and we always agree some stuff and we always think the same. We like to bring the same decks, the same cards and yeah, that’s why we’re so good together.

Orange had this super strong start in 2015 and then he fell out, he didn’t do so well for months but came back really strong in the end of 2015. I’ve spoken to journalists, to fellow players and everybody has different theories, but one of the recent ones is, that he only does well when he’s home in Sweden. People think that when he was living in the Archon house it was the environment that was stopping him. You being one of his closest friends and practice partners, do you think this was the reason or is there something else?

There was a time when he didn’t do well, but we didn’t really talk that much. We didn’t practise together a lot at all. And after, when we started to pick it up again and practised together, he started to do well again. So, I don’t know if he needs me as a practice partner or if his other practice partner isn’t really as effective as I was for him, but I think it’s something like that.

You practise together again now, right?

So this is the key, practise with Freakeh man!

I don’t know, there seems to be something special. I guess everybody needs this one guy.

"Standard will be really interesting to compete in and I definitely think I will be on top."

So, one topic we’re going to ask a lot of pro players here about is just gathering opinions on Standard. It’s coming in rotation in Spring and we talked with Gaara just now, we were talking about what this will mean for the Hearthstone scene as a whole? Will this be the time where deckbuilders shine? What will it do to guys who just play good decks but aren’t really innovative in deckbuilding? What do you think? Even before we get the new cards or theorize what the new cards will bring, what will the effect on the rotation be in general on the metagame or on the scene?

I think in every new expansion or every time something new comes up in Hearthstone, deckbuilders always shine first, because those always do well first and people take after them. When the new standard is coming up, I think it’s going to change a lot. Some of the cards which I hate, for example [card]Dr Boom[/card], a lot of the key cards will be gone and it’s gonna make a huge change. But I’m really looking forward to it. It’s gonna be nice to see how it changes. Also in the pro scene, if the same players are gonna stay on top or if there are new players coming up.

Do you expect yourself to profit from the Standard format and maybe your fellow SK Gaming members?

I think so. I really think so. It’s going to open up for Rogue for example and I really, really like Rogue, it’s what I played a lot until Dr Boom and those cards came and kind of ruined it with [card]Loatheb[/card] as well. It’s going to be really interesting to compete in and I definitely think I will be on top.

Another controversial topic is the decision to keep Classic forever in the rotation and I know that a lot of people don’t really like it, Reynad and Kibler have been strong advocates of having core sets just like Magic: the Gathering just because the Classic set is so uneven when it comes to what cards it offers to different classes. What is your take on this?

I didn’t really think about it that much actually, the Classic set. We will see.

You just said you’re happy that Dr Boom is going. What card are you not happy about rotating out?

Other players argue that its effect is too strong.

It’s a good card! (laughs) It’s good for your style, so you want to keep it?

Yeah, it’s good for the aggro players, so I would like that being.

Maybe a reprint it in the future.