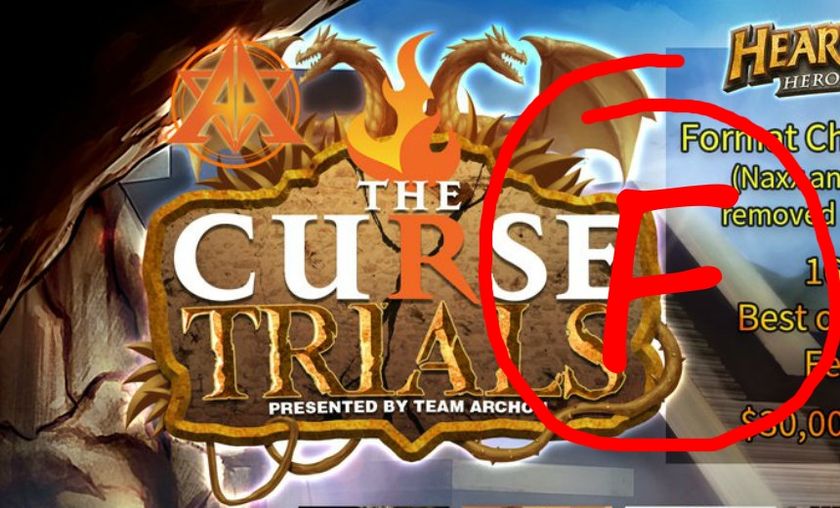 Alternate formats have for the longest time been the holy grail of Hearthstone tournaments. Earlier this month we saw Tempo Storm and RedBull team up for the Redbull Team Brawl. This was the first time Hearthstone had a sealed tournament, a tried and tested format in other TCGs.

Aside from a few puzzling production decisions about playing three games at once, it was actually a rather enjoyable experience. The sealed deck tool made for a rather intriguing event that showed an entirely different side of Hearthstone that we had yet to experience.

The Curse Trials launched last week with another, more simple format. Originally planning on phasing out Classic cards, this was changed to the announced Standard format after Blizzard presented it.

From the start, alarm bells were ringing about this tournament everywhere. From information being sparse and only brought through tweets, to the fact that the announced format itself was changed just a week after the announcement, to the organizers apparently forgetting one of the players they initially invited.

But the biggest issues about this tournament came from the gameplay. I wanted to make this article to explain the numerous issues with this format and the reasons why this event turned out to bring some of the most boring and repetitive Hearthstone we have seen in a long time.

Class balance was a cataclysmic mess

Let it be said and forever repeated that the classic set of Hearthstone is not equally made and should not be treated as such. When you choose to make it a foundation for a format you are going to get an extremely uneven effect on different classes. This is something I already noted that Blizzard will have to address for Standard - and they probably will - but there obviously wasn't any fix available for the Curse Trials.

Blizzard have an entire pack expansion coming out alongside the format introduction as well as some promised card rebalancing. They have their chance to prove themselves as geniuses, capable of accounting for such imbalance and sorting it out in the end. Curse and team Archon had no such chance and instead proved themselves as fools for thinking this kind of format would make for balanced game play.

For Curse Trials, there wasn't any fix available for the unevenness of the Classic set.

Paladin lost everything. All the cards that came to define the early game of Paladin were gone. Still having [card]Mysterious Challenger[/card] or [card]Anyfin Can Happen[/card] was simply not enough. The most dominating class was reduced to nothing.

Warlocks were also stripped of everything. [card]Voidcaller[/card], the card that had made demons relevant and who all past and future demons released had been balanced around was gone. Gone were also [card]Darkbomb[/card] and [card]Imp-losion[/card], the powerful removal cards that had given Zoolocks hope, even in an age where most other classes could compete with their board control. Now more than ever did the ludicrously lackluster releases for Warlocks at the Grand Tournament matter.

Finally, Hunter, while mostly dead and buried in the current meta already, was straight up decomposing at the sight of this format. The Naxxramas set was the last time Hunter got any relevant cards, [card]Quick shot[/card] not included. Without Mad Scientist or Haunted Creeper there was no coherent strategy that could be formed with the remaining trash that have been released to Hunters. Everything Hunters tried to do is something another class does better in this format. Secrets wouldn't work, which also meant no Eaglehorn Bow, they were back at no board control to push for tempo. No options overall. And it showed. Hunters along with Paladin and Warlock had but a single showing at the tournament, and their users soon fell out.

On the other hand, Druid and Shaman were mostly unaffected. These are both classes that saw few relevant cards in Naxxramas and Goblins vs Gnomes, and almost none of the cards from these sets went on to become essentials. Due to the weak effect Goblin vs Gnomes had on these classes it also meant that they had received so much more impactful cards in the later sets.

With the field of available classes stripped so much, it was obvious that Druid and Shaman would be picked a lot. But the real issue was not really in which classes were available. It lied much more central in how the removed cards affected gameplay.

A changed format, for the worse

When turning away from class balance and instead looking at gameplay, things don't get better. The meta was massively changed but the options that were opened were more or less those we have already come to know and hate, except due to the format they were so much more effective.

The real issue was not which classes were available. It lied in how the removed cards affected gameplay.

With Sludge Belcher and Healbot gone, there were so much more incentives to just go with aggressive decks that can finish the game fast, with less focus on winning on the board. We saw this with Combo Druid, a deck that goes toe to toe with most meta decks even today and could always perform in a conquest setting. Not too surprisingly every single player, bar the eternal dragon enthusiast Kibler and Firebat, had chosen Druid as one of their classes, and the aforementioned two were eliminated quickly. The Shaman aggro deck was also a very favored choice. [card]Tunnel Trogg[/card] proved itself to be one of the most efficient aggressive cards and there simply wasn't enough options to fight back.

All of these aggressive styles were decks that had received support throughout 2015, and the strength of this support was balanced around the tools for anti-aggression that were made available in 2014. Now in a world without [card]Sludge Belcher[/card] or [card]Antique Healbot[/card] those decks blew up. Even a lot of the sticky but passive early drops were gone which lessened the incentives to fight for early board control over going aggressive. And this effect showed.

Of course one thing has to be mentioned and that is the final game of the tournament. Easily one of the most epic matches of all time. [card]Varian Wrynn[/card] entering the fray with his alternate voiceover for Anduin, being played again by Anduin and both times summoning [card]Ysera[/card]. There were a few other memoriable games, too, but that doesn't change the fact that the rest of the tournament was the same aggressive meta that we've been seeing in the past years. It was inevitable with such an autonomous approach to formats. The previously announced “reverse-standard” format was likely to have been even worse, as it would amputate even more classes while also leaving catastrophic interactions like having [card]Dr Boom[/card] be legal without [card]Big Game Hunter[/card].

This is not what a healthy format should be.

Honestly, none of this is what a healthy format should be. A working alternate format is one that keeps you guessing. One that presents things we haven’t seen before. One that brings out new options by toning down the previous ones that overshadowed them. In this case all we got to see was stuff we had to come to know and loathe. It was everything that the meta fought so hard against for the past year.

I see this tournament not as a start to a trend but rather a proof of concept, and a failed one for now. It proved that Hearthstone sets are balanced not as single pieces, but in the context of all the cards available at the sets' launch. Taking away some of those previous sets without proper adjustments brings severe problems. Balanced game play simply cannot be made from a partial format and the Curse Trials is a good example of that.

The next evolution of alternate format tournament will likely be those that take a less autonomous approach and dare to make calls on individual cards, those who dare to be intelligent and address the problems directly without all this collateral damage. The Curse Trials was not such a tournament and should at most be seen as a transition if anything. A different kind of Hearthstone but mostly in a degraded way. Something that could be so much better.