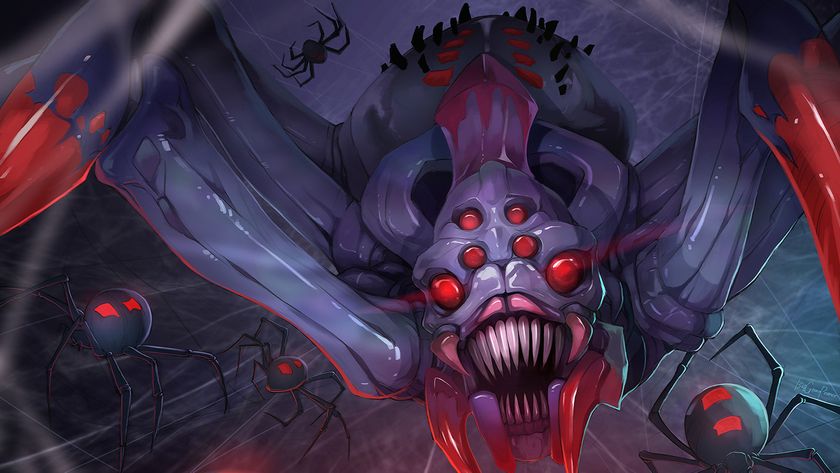 In the third of the five part series, we take a look at the top 5 offlaners in pubs from the past month for Dota 2 patch 7.32.

The offlane is probably the most variable role depending on the meta. Traditionally, offlaners are initiators. But the offlane can be a secondary carry as well, like it was the case at TI8 and most recently, for the metas that evolved around the last few patches, where heroes like Razor and Doom flourished. But with Dota 2 patch 7.32, things have changed again. The offlaners that are making the headlines are ones that are good at holding their own in the lane and getting aura items.

We’ve already seen the mid heroes and carries that are making a name for themselves in pubs in the 7.32 meta. Here, we look at the best offlaners to get the job done.

Visage has been a strong hero in the top tiers of Dota 2 for a while now, and to bring him down a notch, he was subjected to a lot of minor nerfs in the last three patches. There were a few buffs in there, but majority of the changes to Visage in patches 7.32, 7.32b and 7.32c were nerfs. But even with that, the hero continues to be the highest win rate hero in the offlane in top tier pubs.

Tundra Esports used the hero to perfection at TI11. Visage is a force to reckon with in the lane. Grave Chill is an extremely irritating skill to play against, both as a carry or a support. It can make last hitting hell, and also offers kill potential in the lane. According to Dotabuff, all the popular Visage builds max out Grave Chill first. Wraith Pact is the most bought item on the hero in the past one week, and with it, he has a near 60% win rate. Not only can he build it quickly, but Wraith Pact with Gravekeeper’s Cloak makes Visage an extremely tanky hero. This is one hero that will definitely see a nerf in the next big Dota 2 patch.

But Visage isn’t the easiest of heroes to play. Even though Necro’lic is a strong hero, he requires a good deal of practice before players get the best out of the gargoyle and his Familiars. 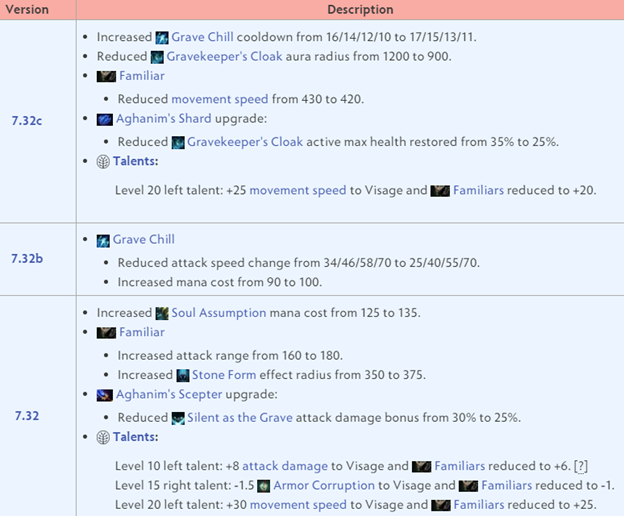 Broodmother was not seeming like a hot prospect when Dota 2 patch 7.32 arrived, because even with the small buffs, her movement speed bonus in webs went down to 0 as her HP went down to 20%. Broodmother is all about the laning stage, and if she can’t get the most from the lane, the hero fails to have an impact. That was changed in patch 7.32b, when the reduction in movement speed was cut down by 50%, meaning at level 4 of Spin Web, she would have 48% more movement speed in the webs at 100% HP, and it would go down to only 24% additional movement speed at 20% HP (as compared to going down to 0 previously). This was a huge change, because it gave her a lot more survivability. Also the HP regeneration in webs was increased in patch 7.32c, which added to her strength and survivability in lane.

Brood has always been an early game hero, dominating the lane, taking the tower and then passing over the baton to the other heroes in the team. Brood, like Visage, can dominate the lane, take the safe lane tower and then start building into aura items like Wraith Pact and Pipe of Insight. There are, of course, lane counters to Broodmother, especially ones that don’t let her capitalize with her Spiderlings at level 6. But when snowballing, she can be quite hard to stop. In the post 7.32 meta, if the Brood tower is the second tier 1 tower to go down, she can barrel down the lane and put pressure on the tier 2 tower as well. That is the benefit of a lot of tower pressuring heroes this meta – there isn’t always a Glyph to protect the tier 2 tower right after the tier 1 in the lane goes down. Like Visage, there were a lot of attempts to nerf Enigma before TI11, but they were all futile, as Enigma managed to be the second most contested hero after Marci with a contest rate of 86.45% in 231 games. The hero offers a lot – good lane control, ways to push out lanes, recurring ministuns, lot of damage in team fights and of course, the threat of the Black Hole. Not the Black Hole, just the threat of it. Whenever there is an Enigma in the opposition team, good teams will alter their playstyle, knowing that just one good Black Hole can completely turn the tides of a game. This is one hero that can be rightly predicted to be hit hard by the nerf hammer, but till then, will continue to be a strong presence in the game.

Legion Commander is the one hero in the top 5 list that doesn’t fit into the aura builder category, and is more of a secondary carry. Her new Aghanim’s Shard, which she got in Dota 2 patch 7.31, was buffed in 7.32. She got added Duel range without having to use up a talent , and also got a new talent that would add to her Duel damage. In case LC is having a good start to the game, the +8 Duel damage can really help rack up the damage. She is now well and truly a core again, as compared to her stint as a position 5 hero because of her previous Shard, which gave her the ability to cast Press the attack on allies. 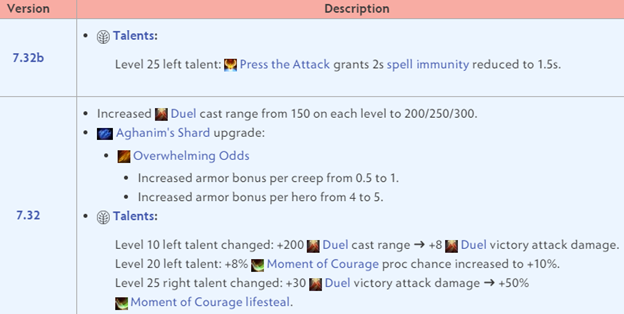 The zoo meta isn’t as strong right now as it was a few patches ago. But it isn’t completely dead either, and the flagbearer of the zoo group is Beastmaster. The great thing about Beastmaster is his versatility in lane. Depending on who he is facing, Beastmaster can either go for the early Call of the Wild build, which is popular in most games. But if there is an adversary in lane that can make short work of the Bore, he always has the option of going for the Wild Axes build. Neutral creeps got buffed in Dota 2 patch 7.31, and the hero that can take the most advantage of that currently is Beastmaster, because of how fast he can farm the Helm of the Overlord. He isn’t the most popular Wraith Pact builder, but in case there are heroes like Chen, Enchantress, Lifestealer or Nightstaker who can reduce the impact of the dominated ancient creep, BM can forgo the Helm of the Overlord and go for a Wraith Pact.

One thing that hasn’t caught up is BM’s new Aghanim’s Scepter, which grants him Drums of Slom. The new ability gives him AoE magic damage, which doesn’t suit his role a lot. But maybe we’ll see a mid Beastmaster build get popular in the days to come which prioritizes the Scepter!