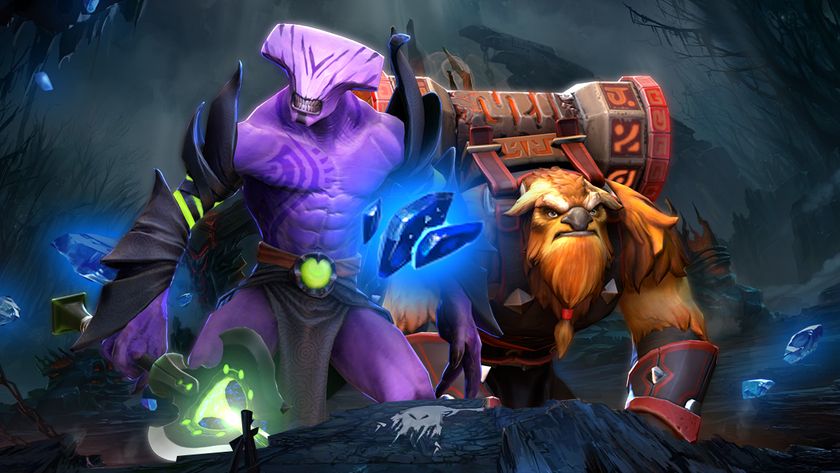 At the end of the TI11 Qualifiers, we take a look at the most popular Aghanim’s Shards across all six competing Dota 2 regions.

With each passing day, The International 2022 (TI11)  draws closer, and the excitement mounts. Dota 2 patch 7.32 was released just before the TI11 qualifiers, and based on those 257 games from the qualifiers, we have a basic idea of what the 7.32 meta looks like. But because of the limited games on the meta, it still remains open to interpretation.

Aghanim’s Shard is an extremely unique item in the game, because it doesn’t consume a slot, provides no stats, but upgrades and ability or provides a new one. The decision on whether or not to buy the Shard on a hero by spending the 1400 gold adds another interesting dimension to a beautifully complex game. This  is exactly why there is always intrigue in looking at which Aghanim’s Shards are popular in the professional scene, especially after a new patch, when there are changed and reworked Shards.

Most Picked Aghanim’s Shards from the TI11 Qualifiers

In the 257 games played in the TI11 qualifiers across all six regions, Death Prophet saw the highest number of Aghanim’s Shards pickups at 54. But in her case, unlike the next three, it is more a case of her popularity, where she has significantly higher picks than the other heroes on the list. Even though her Shard pick rate is around 52%, she tops the other heroes who have Shard pick rates over 90% just because of the sheer number of games she was picked. But a pick rate of 52% is not bad, and signals the fact that the Shard has potential.

Second in line is Earthshaker, who has a near 100% Aghanim’s Shard pick rate. Earthshaker’s  Shard was always strong, but the hero wasn’t in the meta for the past few months. Now that he is back (just in time for The International, like each year), the Shard makes an appearance at the top of the table as expected.

The heroes that round up the top 5 are Faceless Void, Pangolier, and Queen of Pain, with Visage and Dawnbreaker not too far off. 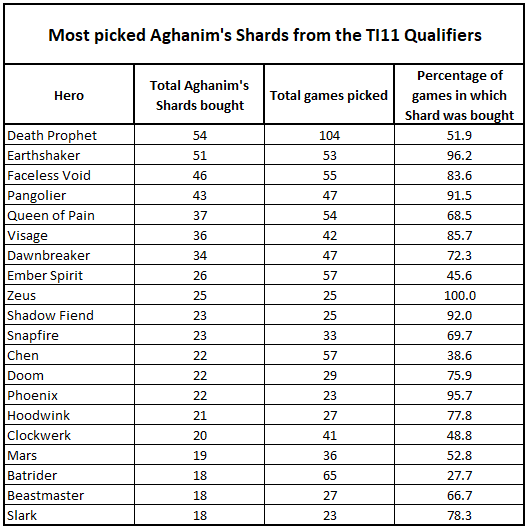 When the highest percentage of Aghanim’s Shard pickups is taken into consideration, two new heroes rise to the top of the list – Zeus and Phoenix. These two heroes don’t have a lot of picks (picked in less than 10% of the games), but when they are picked, the Shard is prioritized every time. 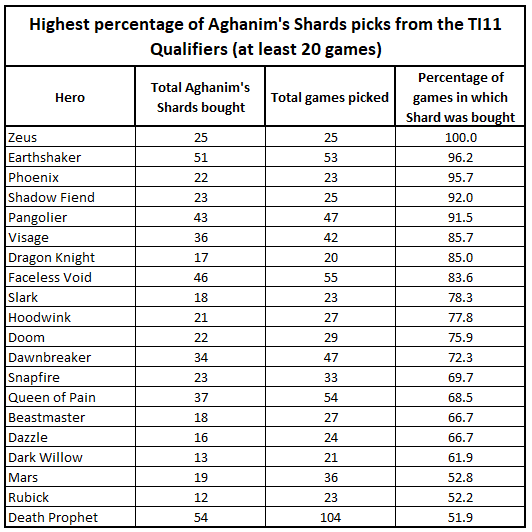 Reduces Fissure cooldown (by 2 seconds) and allows Earthshaker to walk on it. When he casts any ability, an Aftershock is released along its path that stuns for a shortened (50%) duration.

The Shard allows Earthshaker to chain stun enemies without having to get close to them, which increases  his chances of survival. The 1.75 second Fissure stun can be extended to 2.5 seconds, along with the added damage to multiple heroes. The Fissure cooldown reduction is just the cherry on top of the cake.

When the Shard was initially released, the Aftershock along the path had the same stun duration as the original Aftershock, so the stun lock from far away would last for 3.25 seconds. If players caught multiple heroes in the Fissure, they would even use Echo Slam on zero heroes just to increase the stun duration to 4.75 seconds!

Available for seconds (1.5 seconds) after landing Time Walk. If used in this period, you will reverse your time walk back to your previous cast location. Does not affect health or proc scepter hits.

The best carry Shard out there right now. Gives Faceless Void the ability to go in, apply Time Dilation on all enemies (which recently got buffed in Dota 2 patch 7.32), and come back out. It also gives him the ability to mess with the minds of the enemy heroes on whether or not he will use Chronosphere. Pretty much a must- have in any game in which you aren’t extremely behind on your key items like Maelstrom and BKB. Looking at how good the Reverse Time Walk is, there is a chance that a small mana cost will be added to it in the next balance patch. Increases Spirit Siphon charges by 1 and causes enemies to be feared for 1.5 seconds if they are siphoned for 3 seconds consecutively.

Death Prophet has the most purchased Aghanim’s Shard of the TI11 qualifiers, but it definitely isn’t as popular as some of the other most purchased Shards. But there definitely is value to the Shard. The increased charge on Spirit Siphon puts it to five charges, and with the hero having three Spirit Siphon related talents, it can be put to very good use. The fear can is basically a 1.5 second silence, and it can be applied to multiple enemy heroes in a team fight.

Since the dawn of time – or rather the dawn of Aghanim’s Shards – Pangolier’s Shard has been one of the best in the game, just like Earthskaer’s Shard. The Shard offers a lot more than what 1400 gold typically gets you in Dota 2. It allows Pangolier to get off his ultimate without being interrupted, or if you watched the TI10 True Sight, helps him dispel spells, even in the middle of Rolling Thunder. Rolling Thunder has a cast point of 1.2 seconds, which makes it easier to stop (by the opposition) mid animation, but Roll Up has a cast point of 0.1 seconds, which makes it a lot easier to get it off. In case it is a game in which Pangolier requires getting a BKB just for getting off Rolling Thunder, the Shard saves 2650 gold for accomplishing it. Roll Up also gives the hero a chance to turn around while Rolling Thunder is active in case there isn’t any surface to bounce off from.

Zeus shocks any enemy that he attacks or is hit by his abilities, causing damage equal to 9% of their current health.

Zeus isn’t the most popular hero in the meta after he was nerfed in Dota 2 patch 7.32. But in the games in which he is picked, Aghanim’s Shard is pretty much a guaranteed purchase. He has the highest Shard pick rate of any hero in the TI11 qualifiers at 100%! Zeus gets level 3 of the old Static Field ability with the Shard at the 15- minute mark, and with four active abilities, can do significantly more damage with Static Field than before! A 2000 HP hero, when hit by all four of Zeus spells will come down to an HP of 1115, considering the standard 25% magic resistance every hero has. But with Static Field, the hero will be reduced to an HP of 572! The skill has massive potential, which makes Zeus’ Aghanim’s Shard one of the most purchased Shards on an absolute as well as a  percentage basis.

It will be interesting to see if the same Aghanim’s Shards show up in Singapore at TI11, or if teams figure out new Shards with hidden potential.

Does Aghanim's Shard have an impact on your hero picks?