Patch 7.29c tries to bring parity to Dota 2 with a few balance changes to heroes and items. Most notable are the nerfs to Beastmaster and Solar Crest.

Like every major patch in Dota 2, when patch 7.29 unfolded, there were a bunch of things that were broken. Patch 7.26b addressed a few of them, and for the ones that still persisted, Valve has released Dota 2 patch 7.26c. The patch brings a nerf to Water Runes along with balance changes to five items and 20 heroes. The entire set of changes can be found here. We will take a look at the most prominent changes of patch 7.26c.

Water Runes have helped bring parity to the early stages of the mid lane. A power rune at 2 or even 4 minutes had the potential to completely tilt the lane in the favor of one hero, which Water Runes prevent. Because of Runes at minutes 2, 3, 4 and 6, getting a Bottle in the mid lane has become more of a priority than before. But with the immense amount of healing coming from the Water Runes as well as the two sips of the Bottle, a matchup can sway in a particular direction if one of the mid laners gets the rune and the other one is denied the rune either by an opposition support or a summon like Beastmaster’s boar or Lone Druid’s bear. The reduction in HP gained by 20 will curb that advantage ever so slightly.

Even though Solar Crest lost a few stats in patch 7.29, its price was reduced by 1150 gold (from 3775 to 2625), which made the item extremely cost effective. Every team in professional games and high level pubs has at least one Solar Crest in the team, with the second one bought if the lineup favors it. In patch 7.29, the attack speed bonus was reduced from 80 to 65, and 7.29c brings it down by another 10. The item still continues to be good; but it will be slightly less broken than before. 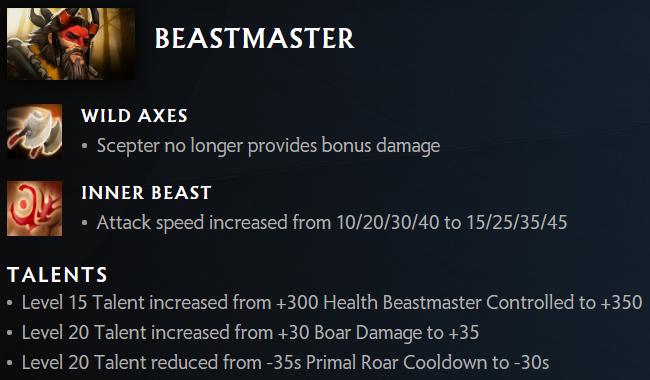 After patch 7.29, it seemed like Beastmaster wasn’t the correct name for the hero. Axe Master would have been more suitable (Axe’s long lost brother?!) because his entire gameplay revolved around Wild Axes. With the bonus +30 damage from Wild Axes taken away (which gave him a 23.07% increase in the Wild Axes Damage), players will have to consider twice before going all in on the Aghanim’s Scepter – Wild Axes route. The changes also buff his controlled units and Inner Beast attack speed, indicating that IceFrog wants Beastmaster to return to the offlane and go back to zookeeper duties.

Hoodwink was introduced to Captain’s Mode in patch 7.29, but because of the nerfs to the hero in all the patches following 7.28, hardly any teams have found her useful in the season 2 DPC League games. Buffs to Bushwhack, which is her only disable, will make the hero viable as either an offlaner or position 4 support. How much professional teams will value her after these buffs will only be revealed in the next few weeks. 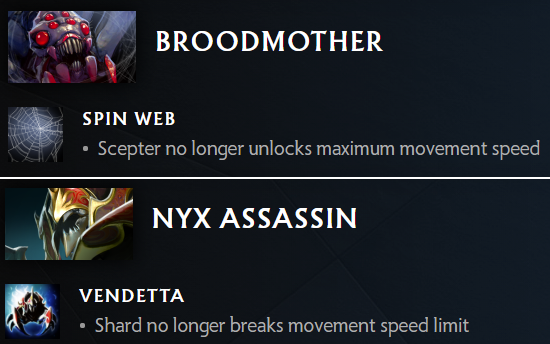 Remember how in Dota 1, Broodmother carried Nerubian Assassin’s (Nyx Assassin in Dota 2) eggs?! Seems like a really long time ago. Well, the old arachnid lovers have had their maximum movement speeds curbed to the movement speed limit of 550. This means the only hero in the game which currently breaches the 550 movement speed limit is Bloodseeker, and Spiritbreaker when he uses Charge of Darkness.

As season 2 of the DPC Leagues continues with its third week, teams will quickly have to get accustomed to the changes in patch 7.29c to ensure they aren’t caught by surprise in any of their games.

Will the nerfs from patch 7.29c finally stop Beastmaster's reign of terror in the mid lane?