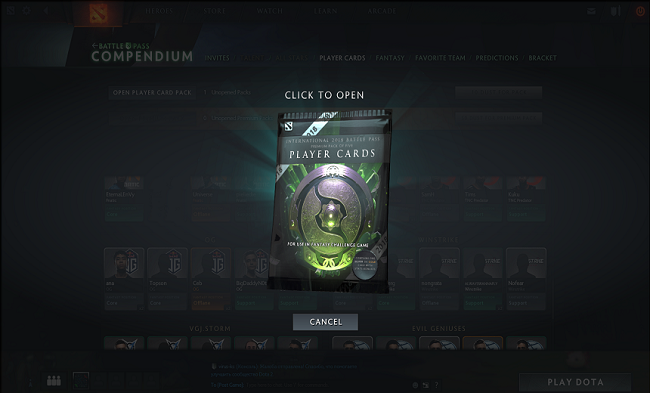 Battle-Pass owners can play the Fantasy League by using Player cards, adding hype to watching
The International 8 and making predictions.

Waiting for the International to start usually has its own atmosphere for everyone. Analysts prepare their predictions, Valve staff prepare for the event itself, players prepare for the battle. But what about the fans? One way of getting involved and prepared is to take part in the Fantasy League using the player cards available to Battle Pass owners. It's a fun way to make the matches more exciting and feel like a part of the action, increasing the fan's investment into the outcome and process. 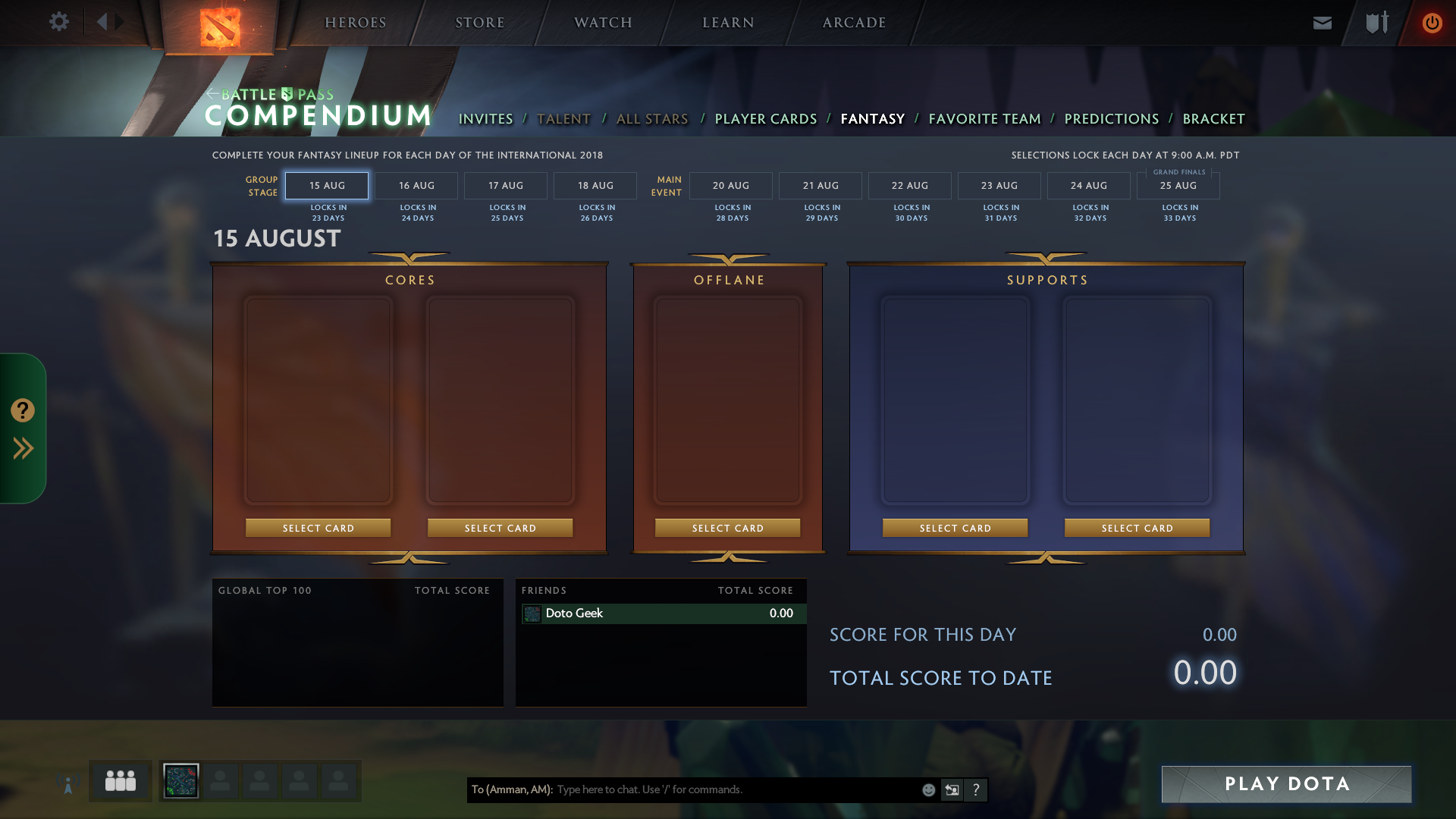 Each time you open a pack you will get five player cards to use in the Fantasy League during The International 8 matches. Sometimes Battle Pass owners will get duplicates but they can easily be recycled by turning them into dust that can be used to buy more card packs. 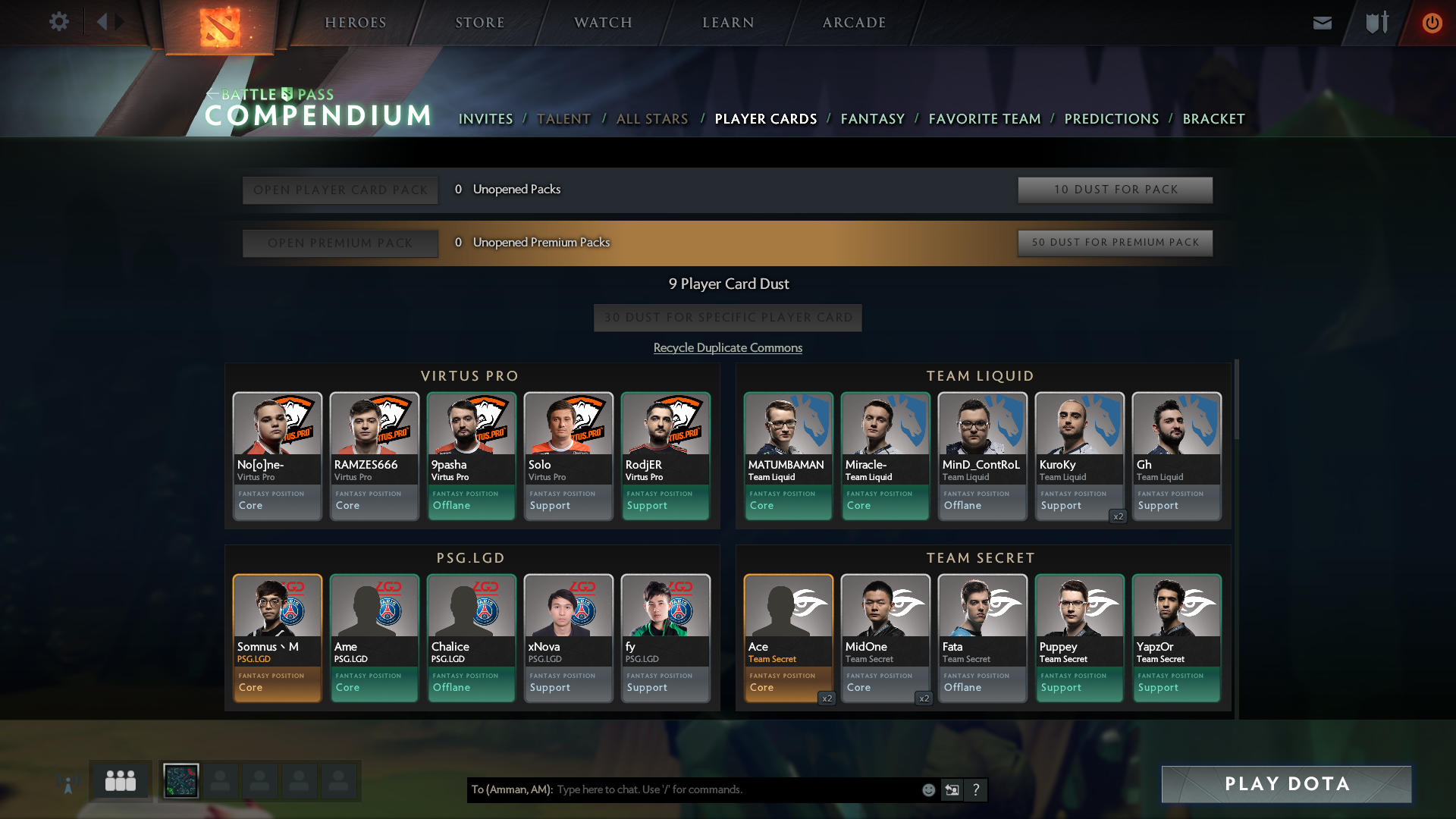 Q1: What are the types of cards we can obtain from the packs ?

Q2: What is the use of the dust that we gain through recycling duplicated cards?

Q3: What is the difference between a Normal Player Cards pack and the Premium one?

Recycle all the duplicate common cards you have by clicking "Recycle Duplicate commons" without giving it a second thought. you won't need them and can use the dusts to gain more normal/premium packs, giving a higher chance to obtain better cards to use
during The International.

Check the Silver/gold duplicates and depending on the role of the player you can (mostly) decide which card to keep and which one to recycle.

For example: Having a core player with the Bonus stat "10% Observer wards planted" is not better than having another card for him with Bonus Stat "15% Creep Score" etc.

Gain four, eight or 16 levels depending on the points you scored during The International compared to the community scores. Levels are awarded after TI8 ends.

So how are the fantasy points calculated for each player?

Players gain points during the matches depending on the stats clarified on the above image for things such as stunning enemies, placing observer wards, participating in team fights. The more a player does, the more points are gained. The only way to lose points is by dying.

Points are updated after each match. In best-of-three series, owners will receive points based on the best two games for the players you chose, in the best-of-five Grand Finals, the best three games are counted.

You can check the fantasy-score for the players while the match is being played by pressing the button 'O'
or check your Spectator Hotkeys at the Stats Drop down section to know/specify a key for it.

Depeding on this way of choosing cards here are some tips :

You can compare your scores to your friends and to the Top 100 leaders in the community by checking the
list that appears under the player-card choices you make each day. Choose your cards and keep an eye on
how good you're doing compared to the community. Besides following these simple steps daily it is important to note that there is a luck factor as well, just like in making any predictions. Upsets can always happen - especially at an event like The International where players are giving their all and pressure is always mounting. Longer matches could end up with originally unaccounted for circumstances such as extra wards or kills.

A perfect example is the Virtus.pro vs Team Liquid Game at Ti7 that took over 103 minutes to be decided. Many people that chose KuroKy's card, especially if it was silver/gold that had bonuses for each ward placed, changed the outcome of their total points.

The International 2018 is set to begin on August 15 and scheduled to run through August 25. For the first
time ever, The International will be held in Vancouver, Canada with a total of 18 teams competing.
Currently, the prize pool now near $22 million after a significant increase from the weekend bundle sale.

Have you tried to play the fantasy league before?