After a dominant 16-minute victory in Game Three, ViCi Gaming is the second finalist of The International 4! They have secured $1,500,000 and they will now have the chance to win the Aegis of Champions against NewBee in the best-of-five Grand Final tomorrow.

03.00: After a slow start where teams are still vying to establish lane dominance, both teams are setting themselves up with some early game farm.
04.00: FIRST BLOOD! Universe’s Dark Seer gives away the first blood to Sylar’s Nature’s Prophet after an overextension at the bottom lane.
06.00: VG march towards the mid tier one tower after securing a second kill in the river and aptly take down the first tower in the game.
08.30: EG STRIKE BACK! Universe and company strike back with a team fight ending up in their favour. They secure three kills after being down 2-0 although they are still trailing behind in terms of experience and gold, especially, after the fall of their second tower.
10.00: VG are looking solid as they destroy two more towers of EG whilst the Americans are unable to cope with the excess pressure from VG’s push.
12.30: The first set of barracks fall for EG as VG break into high ground. EG are in a bleak position as their heroes are falling apart quite easily by VG’s superior line-up with the end nearing.
15.00: GG! After Arteezy gets caught out one more time at the mid lane, VG find their chance to march towards another set of barracks. Even though the Chinese don’t manage to take down another set of barracks, EG know they are trailing behind in terms of gold and experience by a huge margin. With hopes lost, EG live to fight another day and call ‘GG’. 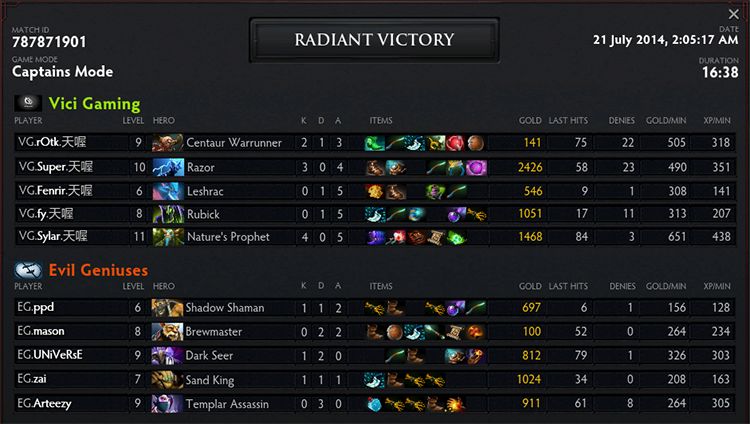 Draft: EG opt for heroes they are comfortable with by picking up Enigma, Faceless Void, Weaver, Alchemist and Viper. VG responds with Doom, Nature's Prophet, Ancient Apparition, Vengeful Spirit and Dragon Knight that allows them to deal a considerable amount of burst damage.

4:00 - Still no first blood. The teams seem quite passive during the first few minutes of the game.
5:41 - Both teams grab a kill almost simultaneously, but the first blood goes to ViCi Gaming with a kill on mason. rOtk also went down to ppd and UNiVeRsE.
6:00 - A spot-on three-man Chronosphere by UNiVeRsE results in two kills for the Americans. Mason and Arteezy get slain a few seconds later by VG's returning heroes.
9:30 - Mason takes down Sylar solo under the Radiant bottom tier-one.
11:00 - UNiVeRsE gets Doomed and picked-off near his middle tier-one tower, and the retreating Arteezy also goes down near the Roshpit.
12:30 - Sylar's cocky play brings his death as he dies while attempting to steal EG's Ancient money.
14:00 - ViCi Gaming catches Arteezy inside the Dire jungle, making the score even once again at 6-6.
15:00 - A teamfight takes place in the Radiant woods, with UNiVeRsE and rOtk killing each other and mason grabbing one more kill for his team before retreating safely. Overall 2-1 for EG.
17:00 - ViCi's heroes gather and go for a long push at the bottom lane. The tier-two tower is almost dead but still standing, and Zai gets assassinated in the process.
18:00 - An impressive three-man Chronosphere into Black Hole combo by EG brings the death of four for ViCi Gaming, with UNiVeRsE being the only casualty for EG and fy being the sole survivor for VG.
21:00 - PPD gets sniped near the river and VG find the opening to siege and destroy the mid tier-two tower.
23:00 - ViCi Gaming's attempt to bring down the last outer tower of their enemy goes wrong as Super and rOtk get caught out-of-position and slain before they can deal enough damage. However, fy and Sylar manage to kill both UNiVeRsE and mason, resulting in a 3-2 fight in favor of the Americans. The tower did go down, so zero outer towers remain for EG.
28:00 - A grave mistake by ViCi Gaming as they attempt to chase Zai without vision and get caught inside UNiVeRsE's Chronosphere. The Black Hole follows and Evil Geniuses win a 4-0 fight. Fy escapes again.
36:00 - Yet another destructive Chronosphere by UNiVeRsE, and this time only Sylar escapes with his life. The middle and top tier-two towers of ViCi Gaming get destroyed.
39:00 - The Chinese know they need to finish the game fast. They enter the Dire base through the middle lane and burst down Zai and UNiVeRsE. The buybacks from the Americans result in the death of two, and EG grabs a very fast Roshan as well.
41:00 - In an attempt to capitalize on their Roshan advantage, EG go for the bottom barracks and a teamfight takes place between the two teams. Sylar, Super and Zai go down quickly, and both Zai and Sylar buyback to return to the fight. EG's persistence brings the death of four and possibly the first lane of barracks for the Americans.
43:00 - The damage has been done! EG abuses the opposition's crippled defense to demolish two sets of barracks, losing three and killing three.
45:00 - GG! VG's final stand is unsuccessful as they fail to take down the middle barracks and get caught inside the Chronosphere-Black Hole combo. Four heroes go down and rOtk instantly forfeits the second game. 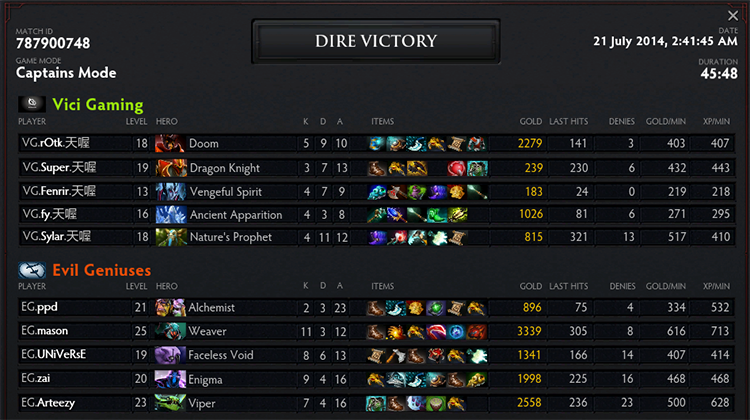 Draft : EG instantly selected the Enigma and Void combination once again, adding Timbersaw and Alchemist in their massive damage combo. ViCi responded with a lineup similar to the first game, with Venomancer, Furion and Dragon Knight as their cores. Pay attention to VG's Shadow Demon - Leshrac duo that will aim to bring EG to their knees during the early game.

00:39 - PPD gets caught and insantly blown up by Dragon Knight, Leshrac and Shadow Demon. The first blood goes to VG.
5:00 - Many attempts but no kills so far for either team. rOtk is currently giving mason a very hard time as Void only has 6 creep kills compared to rOtk's 40.
9:00 - Using their strong pushing abilities, ViCi Gaming is taking EG's tier-one towers down one by one. The destruction of the final tier-one tower of the middle lane is messy, as Super gets caught inside the Chronosphere and bursted down. Mason goes down in return, making the score 2-1 in favor of ViCi.
13:00 - Zai gets ganked inside the Dire jungle and VG manages to demolish the top tier-two tower. With the bottom tier-two going down as well only seconds later, only one outer tower remains for the Americans.
15:00 - The mid tier-two tower goes down to VG as EG grabs a sneaky Roshan.
15:50 - GG! ViCi Gaming march on the highground and they win a very convincing fight inside the Dire base! The 'GG' is instantly called and the Chinese are going to the Grand Final!