Invictus Gaming is the first team to advance into the grand finals of WPC-ACE as they defeated NewBee in straight games. They will be awaiting the winner of the DK-Alliance series to know which one they will face in the best-of-seven championship.

Invictus Gaming had a convincing 2-0 victory against NewBee, with the latter not looking anything like the streaking team that they were. iG was impressive in both games, taking full control and having both Ferrari and Luo not sparing a death in both matches.

They have now advanced into the best-of-seven championship scheduled tomrrow, on which they will be facing the winner of the DK-Alliance semifinals match later. The winner of this tournament will receive $161,000~ in cash prize.

Head over to our event page for WPC-ACE.

Both teams have strong middle-game presence, with iG hoping for a strong push with their Nature's Prophet and Brewmaster and NB looking for sustained teamfights with heroes like Dark Seer and Necrophos. iG got an ideal start as they claimed first blood just 43 seconds into the game as Rubick and Visage looped around to help kill Necrophos.

iG also secured the next three kills of the game, racing off to a 4-0 start before they gave up a death. NB was leading the experience graph despite of this because of the better performing offlane in Dark Seer and the efficient jungling of Doom. The winning team of The International 2 made good use of their line-up which required less levels to click as they took down towers without any contest from the enemy. They used that momentum to win a battle up top as they dived past the enemy tier-two tower,killling four enemy heroes and losing none.

NewBee's carry in Mirana was very underfarmed, and iG was claiming heroes and towers at will. The latter took down the top melee barracks basically unchallenged, and they later on picked off two heroes before taking a go at the middle lane. NB tried to defend, but they failed badly and called GG as soon as their first hero died on that base defense. 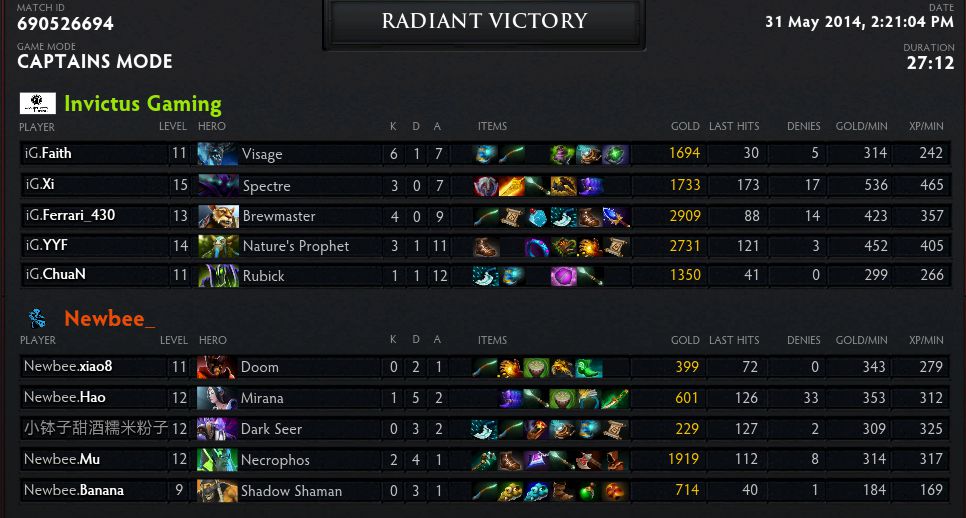 Draft - Both teams have strong middle-game line-up. NB has Necrophos mid, Mirana top, Dark Seer bottom and duo of Doom and Shadow Shaman sharing the jugle. iG has a Brewmaster mid, Nature's Prophet top and the rest at the bottom lane.
00:43 - iG takes the first blood by killing Necrophos, assisted by gank from Rubick and Visage.
10:25 - NB takes the first tower of the game, and iG takes a tower for themselves just seconds after. iG started with a 3-0 kill score which had them leading in both gold and experience at this point.

12:27 - iG tries to make good use of their line-up's strength, and they took the tier-1 bot uncontested. Kill score is currently 4-1, but NB is ahead by 2500 in experience because of the jungling Doom. The gold is slightly in favor of iG.
15:47 - iG overpowers NB, winning a 4-0 skirmish despite diving past the enemy tier-2 tower.
18:03 - NB was able to take down Roshan, but Spectre was able to snatch the Aegis. Another engagement won for iG, this time going 2-1, and they also took down the two tier-2 towers of their enemy. XP is still slightly in favor of NB, but iG now has a decent 4,000 gold lead. Score is currently 10-3, and Spectre just picked up his Relic

23:00 - iG took the top tier-3 and the melee barracks after picking of two heroes. They were also able to kill the very underfarmed Mirana before they retreated.
26:10 - NB lost two of their heroes again due to pick-offs by the enemy. They tried to challenge the middle-lane push, but their attempts were futile and they called GG right after they lost their first hero on that engagement.

Its a battle of dual-lanes on game 2. iG had a Lifestealer-Leshrac duo, while NewBee had a Brewmaster-Visage pair. The offlanes were handled by Nature's Prophet and Bristleback, while the remaining two for each team were on the farming lane. NB had a surprising last pick with a Bloodseeker. NewBee had the better start this time around, with Nature's Prophet sniping the courier and the team taking first blood.

iG's line-up is much more potent early, and that they used to take the game's next three kills. The only bright side for NB this time is that they were able to let Bloodseeker farm, as both Bristleback and Invoker were all rotating to help secure kills for their team. NewBee was putting the pressure on with their pushing presence, but they made a crucial mistake of diving for the Bristleback. Despite managing to kill that hero, they lost four heroes because they can't bring down their target quiickly enough. Because of this and the tier-1 bottom tower they took after, iG suddenly found themselves ahead by 10,000 gold.

The Bloodseeker pick is starting to hurt NB, and they cannot do much to make something happen. They had two pickoffs to start a fight in the 19th minute, but that is the best they can get as they lost two heroes after. iG had an uncontested Rosh four minutes later, only to find themselves being annoyed by the split-pushing Nature's Prophet.

The game followed a very passive phase after that. From the 19th minute to the 50th minute, only two hero kills were registered. iG was playing very safe, and they eventually had overwhelming farm because of their map control. They cruised through the top and bottom lane, forcing their enemy to call GG. 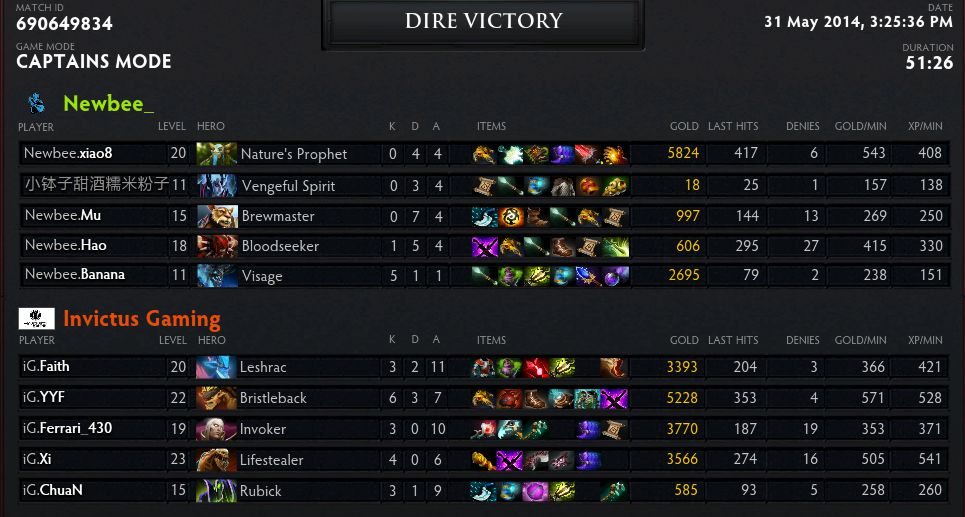 Draft - Both teams went with dual lanes. Brewmaster-Visage against Lifestealer-Leshrach was the battle mid, while Nature's Prophet and Bristleback manned up the offlane for their team.
2:20 - Nature's Prohpet was able to snipe a courier. The teams also traded hero kills but it was NB who took the first blood.
10:03 - iG took the next three kills, and at this point NB tried to make something happen with a dive past the tier-1 mid tower. Teleports and a well-placed Tornado by Invoker had his team getting a revenge kill. All tier-1 towers are still standing with NewBee having a slight edge on experience and iG ahead on gold.

17:00 - iG won a 4-1 team fight after NewBee just lacked the damage to kill the tanky Bristleback. They also took down their first tower of this game after. The gold lead taken by NB from three tower kills were already neutralized at this ppint, and iG suddenly found themsleves ahead by 10,000 gold.
19:05 - NewBee was able to pick off Leshrach, but they can only manage a 2-2 trade despite a quick kill for them. iG is ahead in kills 13-5 and NB's Bloodseeker is now looking very inferior against the enemy cores in Lifestealer, Invoker and Bristleback.

23:37 - iG smoked up and killed Roshan without any contest from the enemy.
30:50 - NB is hanging on by Nature's Prophet split pushes. iG was farming more efficiently though, and they look very poised in this match. It appears that Roshan will be the next objetive of the team. They are currently ahead 15-5 in kills, 7,500 in gold and more than 20,000 in experience.

36:00 - Despite iG taking Roshan, not much progress was made. Nature's Prophet was still trying to split push, and all other heroes are trying to farm up. No hero kills are tallied
50:00 - The next kill was tallied almost 20 minutes after, and this time iG is just very much ahead (more than 30,000 gold and 15,000 experience). They cruised through and forced NB to call GG.