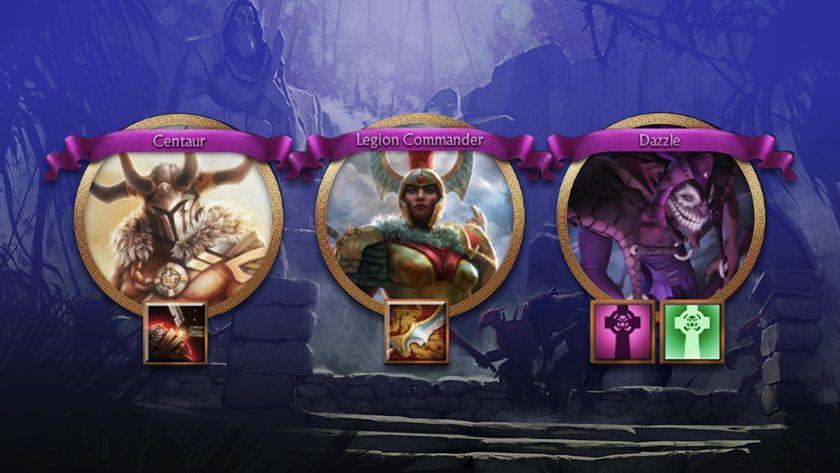 We take a look at the three most basic Gods to play in Ability Arena – Centaur, Dazzle and Legion Commander.

So you’ve looked at the GosuGamers’ basic Ability Arena guide and given the game a try. Problem is, you keep losing; keep getting pummeled by the high rank players because the matchmaking system for custom games in Dota 2 is all crazy and cooky. You find yourself asking the same question you always do in Dota 2 ranked matchmaking – ‘How do I get out of Herald?’ Not to worry, we’ve got some help here with the three most basic Gods of Ability Arena that can help you rise in the ranks.

The three Gods are-

These three Gods are available to all players from the start, and have a one-star (easy) difficulty level. Let’s go through each of their abilities and look at a basic framework of how to best utilize them to gain from Ability Arena MMR!

Centaur is a God which allows one hero from your team of five to get tankier with each round and return physical damage to enemies. The hero that is given the Great Fortitude buff will keep gaining 60 HP per round. Centaur got buffed with the release of Ability Arena 3.0 with the health per round increasing from 50 to 60.

The first and foremost thing to remember while playing Centaur is that this buff needs to be used on a frontliner. Using this on a ranged right clicker or spell caster that stays in the backlines is a waste of the God’s abilities. More the HP on the buffed hero, the better use made of the Great Fortitude buff. The best way to go is to use a strength hero, because they tend to have the most HP and strength gain. 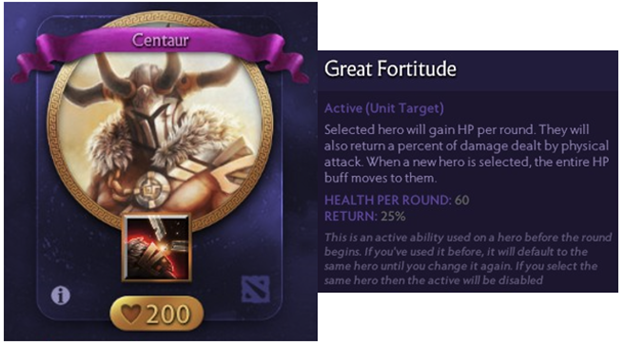 The good thing about Centaur is the God’s abilities are not dependent on shop level or spell points like a lot of others. Irrespective of what shop level you are at, or how many spell points you have, the HP buff at each level stays the same. So there is nothing special that you need to do to maximize the Great Fortitude buff.

In the skills section, we will concentrate on skills of the hero with the Great Fortitude buff.

What you want to do is keep the tanky frontliner alive as long as possible. That way, the enemy heroes spend more time attacking the buffed hero, while your other heroes are free to dish out damage. The best ways to keep a hero alive for a long time is the use of passives like-

What is great about Dispersion is that it further increases the hero’s effective HP (EHP) while returning even more damage to enemy heroes in an AoE.

But staying alive doesn’t have to be the only thing the Great Fortitude hero does – there can also be damage dished out! Spells like Counter Helix, Dark Pact, Double Edge and Quill Spray – basically spells with short cooldowns – are great ways to deal damage with the main hero.

Probably the best ultimate for a hero with the Centaur God’s buff is Borrowed Time. A 2000 HP hero with Borrowed Time, Counter Helix and Dispersion is a perfect recipe for dealing insane amounts of damage to the enemy heroes. With a healer positioned behind, the buffed hero can continue to stay alive for a long time.

Here’s an example from a Centaur game in which I used Earth Spirit as the tanky frontliner with the Great Fortitude buff. Besides the additional HP, Earth Spirit gets tankier with Resonant Pulse, Kraken Shell and Dispersion. At the same time, he deals a lot of damage with Pulse Nova, and has Oracle behind him to keep him alive with Cold Embrace and False Promise.

When GosuGamer’s did an interview with Ability Arena’s co-creator Shannon “SUNSfan” Scotten, he revealed his favorite God was Centaur!

My favorite God is definitely Centaur (shocker). I love making people tanky and using spells that are not picked very often.

When the game’s creator says that about a character, it is definitely worth paying more attention to! 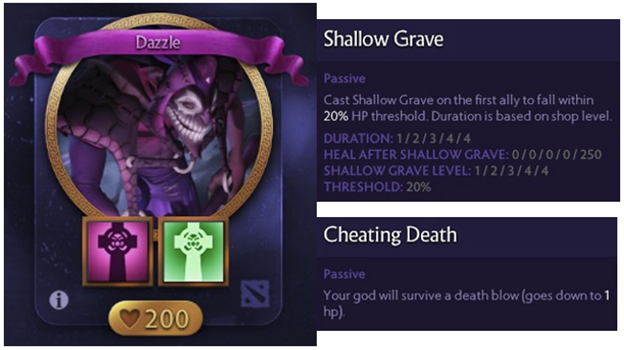 Unlike Centaur, maximizing the hero buff in Dazzle’s case does depend on shop level. Higher the shop level, higher the Shallow Grave duration. The final increase in shop level (from IV to V) does not increase the Grave duration, but heals the hero at the end by 250 HP.

The early levels aren’t too flattering for Dazzle. Shallow Grave starts making a significant difference towards the later shop levels, so there is more impetus for a player to go to higher shop levels while playing with the Dazzle God.

Like there are specific skills in case of the Centaur God that make a lot of sense, it isn’t so with Dazzle. Shallow Grave is applied to the first hero that hits the 20% HP threshold, and while that can be the tanky frontliner in a lot of cases, it completely depends on your opponent. In case your opponent has heroes jumping on the backlines, Grave will be used up on a right clicker or spell caster. The advantage of Grave is that heroes will be able to get their spells out before dying.

This plays in favor of heroes that are jumping in to use abilities like Chronosphere or Ravage. A lot of times, the initiators can get disabled and die before they get off their big ability, which can completely change the way a fight goes. With Shallow Grave, that ability will almost always be used, especially with a 4 second invulnerability.

Enemy heroes continue to attack the hero on whom Shallow Grave gets used, so it isn’t a bad idea to stack frontliners with abilities like Counter Helix and Dispersion, which can dish out a lot of damage in those 4 seconds.

A couple of abilities can be really good – Time Walk and Sunder. In case you are up against a line up with a lot of burst, Shallow Grave can prevent death, and Time Walk can walk off the damage. In case of Sunder, the 1 HP hero can Sunder an opposition hero to get back up to high HP. There are more than a few synergistic abilities, but these are the ones that come to mind right off the bat.

The second of the Dazzle God’s abilities isn’t doesn’t warrant too deep a conversation. It helps you survive one extra round, which depending on the game, can either have no consequence at all or could end up being a massive boost. If your game has no chance of saving, it doesn’t matter. But if you are on the brink of making your strategy work and are on the lookout for just one or two skills, then it can make all the difference.

Below, I have the stats from a game in which it was Dazzle versus Dazzle at the end, and both of us were at 1 HP. I had lost the penultimate round, and there was a good chance that I would be the one going down. So I switched it up a bit, and put Blink on my Magnus, so I could Chrono the backline. My adversary didn’t expect it, and I ended up winning the game!

Is it a bit too much of tooting my own horn? Maybe. But the point is, depending on the situation, that extra turn can come in very handy. It can be the difference between finishing fourth instead of fifth, which is gaining a little bit of MMR instead of losing some.

We come to the final hero in the basic heroes – Legion Commander. Legion Commander is a bit like Centaur, in the sense the buff from the LC God affects just one hero. But unlike the Centaur God, where the buffed hero is on the frontline to take damage, the hero with Stonehall Pike needs to be protected, because that’s where a lot of the damage comes from! Stonehall Pike accumulates damage, and the damage buff for a particular round is the integration of the buffs at all rounds. 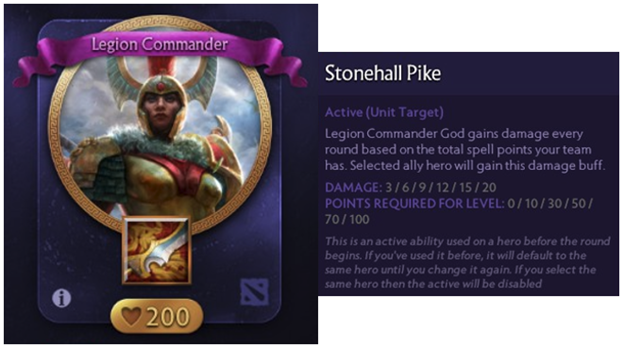 In the case of the Legion Commander God, it is important to have a lot of spell points. What are spell points? It is the total of the spell levels of all spells your team has (including spells on the bench). If you have two heroes with four level 1 spells, that’s a total of 8 spell points. The damage Stonehall Pike provides increases with spell points, so you need to make sure you have as many as possible.

For a lot of Gods, players tend to concentrate only on skills they need. In those scenarios, there might be heroes with just one skill – say a hero with a channeling skill like Death Ward. While that might be fine for most Gods, in the case of LC, that tends to be detrimental. It is good to put in some skills for each of the available slots to increase spell points.

It is beneficial to have a hero with good base attack speed and cast range (if it is a range hero) so that there is less chance of the main damage source dying early in the fight. The buff provides damage, so what needs to be added to the heroes arsenal is attack speed and lifesteal, and there are quite a few skills available to provide both of those.

One of the best ultimates for the hero buffed with Stonehall Pike was Elder Dragon Form, but that has now been taken out of the game. In the remaining set of skills, Chemical Rage provides some good attack speed. Coup de Grace can be amazing to amplify the already increased damage, which can also be done with Walrus Punch. There are a lot of different ways in which Legion Commander’s buff can be put to the best use, but you get the gist of it.

Two skills that need a special mention are Multishot and Burning Barrage. With high levels of these spells, attack speed is not a necessity because the down time is quite low. As long as the hero has enough mana to use one of those skills multiple times, the damage output will be substantial.

Another thing that can be done is have a hero just to buff the main damage dealer with spells like Bloodlust and Empower. These are very underrated skills, and when used on strong heroes, are massive boosts to the overall damage output.

With that, we come to an end of the detailed insights into the three easy free-to-play Gods in Ability Arena. In the next few days, we’ll take a look at the slightly more complicated Gods that are available for all to try out.

Are you enjoying Ability Arena?