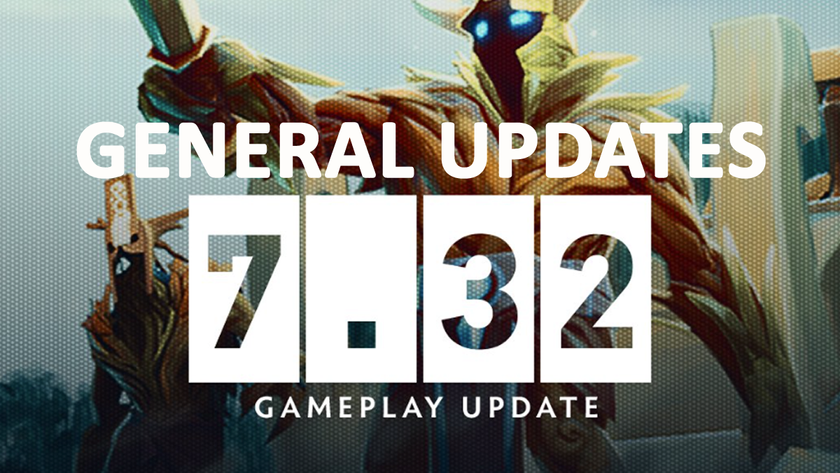 We take a deep dive into how the general changes from Dota 2 patch 7.32 will potentially shape the new meta.

When a new Dota 2 patch arrives, it is natural to have your attention go towards your favorite heroes, and also the ones you loathe. While changes to heroes and items are a fun part of a new patch, much of what defines a Dota 2 meta comes from the general changes the patch brings with it – gold, experience, map changes and the likes.

The Dota 2 meta had been stagnant for quite a while, as more than a few patches before 7.32 did not have any significant changes. But the 7.32 patch has brought with it more than a few changes that are bound to make players switch their approach to a lot of things in the game. Let us take a look at what those changes are and how they will potentially shape the new meta.

The experience gained in two scenarios was altered in patch 7.32.

In the world of Dota 2, that is a lot of time. For snowballing heroes playing on a timer, this is a gut wrenching change. It has the potential to increase game times, which is always a positive for back and forth TI games. Supports will be hit a lot harder with this, and getting to the higher levels will be a much harder time for them. 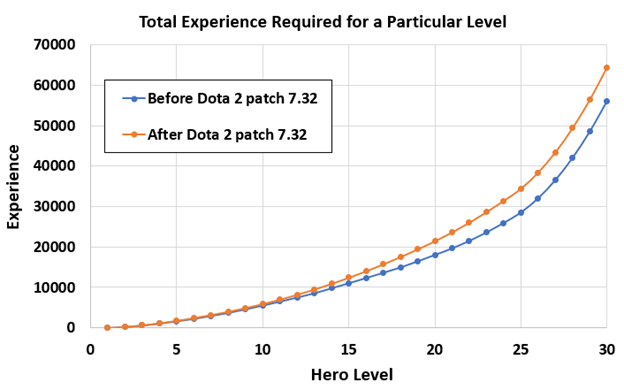 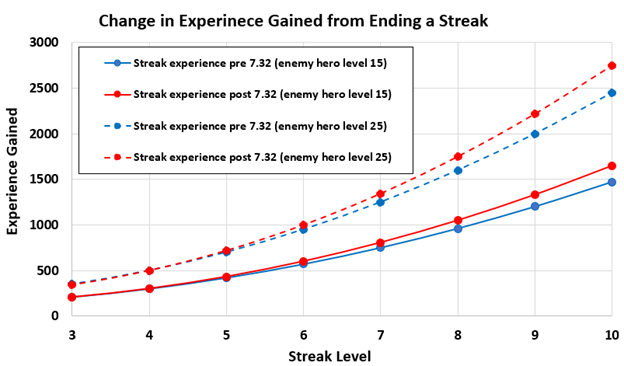 Added Flagbearer Creep. Starting at minute 2 one of the melee creeps in every second creepwave is replaced by a Flagbearer. It has 40% magic resistance and an Inspiration Aura, which gives +3 Health Regen to all allies within a 700 range. Killing an enemy Flagbearer will grant you and each allied hero within 1200 radius bonus gold equal to 100% of a Melee Creep's bounty. Does not grant gold on deny and cannot be denied by hero abilities, e.g Demonic Conversion.

The +3 Health Regen, while not a lot, is definitely helpful for heroes like Spectre, who aren’t strong in the laning stage and have to keep close to their tower. 20 seconds in the basking glory of the Flagbearer is equivalent to consuming half a Tango.

The big thing is the additional gold. The passive gold gain has decreased by 15% this patch (which we’ll get to later), and that is offset by the additional gold from the Flagbearer. In the laning stage, the average creepwave gold is 157. The Flagbearer wave offers the potential to increase that to 230 in the side lanes and 193.5 in the mid lane. If a team is able to get all the Flagbearers across the three lanes, it is an additional team GPM of approximately 182.5, which in the early stages is quite significant. Not that it isn’t good later on in the game for an added boost to farming, but the impact will be higher in the early game. It will be interesting to see how professional teams adapt to and make use of the addition of the Flagbearer.

All through Dota 2 patch 7.31, a total of 3685 professional games were played, in which Dire had the advantage with a win percentage of 53.22%. Not that games were heavily skewed in favor of Dire, but the numbers were pretty similar irrespective of whether a team had first pick or second pick. For the past few patches, Dire has had an advantage of positioning when it comes to Roshan fights. So to even the odds a bit, Dire has seen a few map changes that will make approaching to the Roshan pit a bit more difficult.

This is a small change that is bound to have a massive impact on the mid lane. When heroes had a bad mid match up, they could always turn to farming the small neutral camp close by. Certain heroes like Keeper of the Light could just blast the creepwave and farm the small camp for additional gold and XP to get ahead. But with the small camp gone, that option is now off the table.

The mid lane will now be much more skill and hero dependent. Teams won’t be able to pick unfavorable matchups, hoping that their mid laner will be able to keep up by farming neutrals.

This is a very interesting change. A fast tower taking lineup like a zoo lineup can now take down a Tier 1 tower and proceed to demolish a Tier 2 tower because of Glyph being unavailable, so it does make things slightly difficult for slower paced lineups in the early game.

But in the mid to late game, this changes serves as an excelled means to either protect a set of barracks or prevent the enemy from taking a second set of barracks right after the first one, or going directly for Tier 4 towers after taking down one Tier 3 tower.

Passive Gold per minute decreased by 15%.

With the 15% reduction in passive gold in patch 7.32, those numbers now look something like this-

How much difference does that make throughout the game? As it turns out, not too much. Heroes will have 480 less gold at the 30 minute mark, and 1008 less gold at the 60 minute mark. Not that it can’t make a difference, especially for supports. Important items can be delayed by a minute or two, which can have significant impacts on team fights. But for cores, the gold lost can be pretty much made up because of the additional gold the Flagbearer brings to the game. 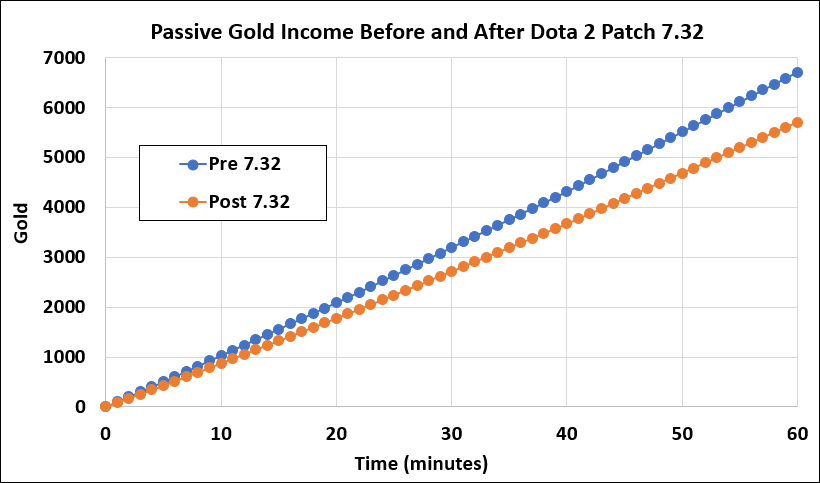 The two changes to Ancients have made the process of taking down the throne and ending the game the more daunting process, especially in close games.

Ancients Armor increased from 13 to 23.

The Ancients have 4500 HP. With an armor of 13, the effective HP (EHP) against physical damage is 8010. But with 23 armor, that now goes up to an EHP of 10710, which makes it tougher to take down the Ancient. This change gives the team on the backfoot a higher chance of staging a successful defense.

Thinking of backdooring the Ancient in a base race? That just got twice as hard.

Dota 2 patch 7.32 has set us on a very interesting path to The International 2022 (TI11). Teams will have to recalibrate their timings if they are to outsmart their opponents, and that is bound to bring with it some interesting, unforeseen strategies.

Do you like the general changes from Dota 2 patch 7.32?