During the weeks leading to TI10, GosuGamers will be taking a closer look back at the meta for each of The Internationals through the years. This week is TI4.

On our journey to the Tis of the past, we have now arrived at the station which is not remembered too fondly by the Dota 2 community. The International 2014, or TI4, was a tournament where the death ball meta was prevalent and that put quite the dent in the excitement, especially when it came to the grand final.

TI4 was held at the Key Arena in Seattle, the venue that would go on to host all Tis till TI7. It was the first time the prize pool for the tournament had taken a massive jump to get to a little over $10.9 million, nearly quadrupling the TI3 prize pool. So while the stakes were high for the first three Tis as well, they pushed up to an unforeseen level at The International 2014.

The International 2014 had the weirdest format of any TI, and is probably the reason it was never repeated. Eleven teams were invited directly, four made it through regional qualifiers (the regions had been expanded to Americas, SEA, China and EU instead of the previously used East and West regions). The teams that finished second in each of the regions went to a playoff amongst themselves, with the winner getting a spot in the coveted 16 (which isn’t the worst idea). The format for the sixteen teams was as follows:

Why was this possibly the worst format of all the TIs? Because six teams straight away got eliminated from the group stages on the basis of one game played against each of the other teams. In all the previous years, no teams had been eliminated from the group stage (currently, it stands at one). This format did not allow teams to evolve through the tournament, as the tournament meta developed, neither did it give them a chance to gauge their opponents in the group stage and change their strategies from what they had learned.

When the fog cleared, Newbee and Vici Gaming were the ones who saw themselves challenging for the Aegis and a chance of winning over $5 million in prize money. Fun fact, this was the only TI grand final where there were two Chinese teams going up against each other. Also, TI3 and T9 are the only two Tis where there wasn’t a Chinese team in the grand finals.

TI4 was played on the 6.81b patch, which was a few patches ahead of the 6.78 patch on which TI3 was played. Let’s take a look at the general changes between that time which could have had a significant impact on the game play.

●        When Aegis expires unused, it heals the hero fully over 5 seconds (regen dispels on damage from players or buildings)

-Buyback was significantly nerfed, seeing how it had been used a bit too freely in the years before (after a few hard years for buyback, it is in a much more lenient place again).

-The Roshan timer was changed from 10 minutes straight to a random respawn between 8 to 11 minutes, which is what it is now, after all these years!

The ban and pick phases for TI4 were similar to the ones at TI3. No changes had been made in that area. First pick still continued to be strong, having the first pick of the game and the last pick of every pick phase.

●        The meta during the time of TI4 was a death ball meta. The death ball meta was essentially picking strong laning heroes, winning lanes, congregating as five at the end of the laning stage and taking down towers without giving the opposition a chance to respond. This required heroes that could take down towers easily.

●        The four heroes that were first phase banned in every game of the grand finals were Razor, Death Prophet, Lycan and Enchantress. All of them were formidable foes in the lane and had the potential to push towers using abilities, summons or sustain.

●        In every game, Radiant had the first pick, meaning teams either chose first pick or they chose Dire.

●        Brewmaster was picked in three of the four games of the grand finals, and won every game he featured in. 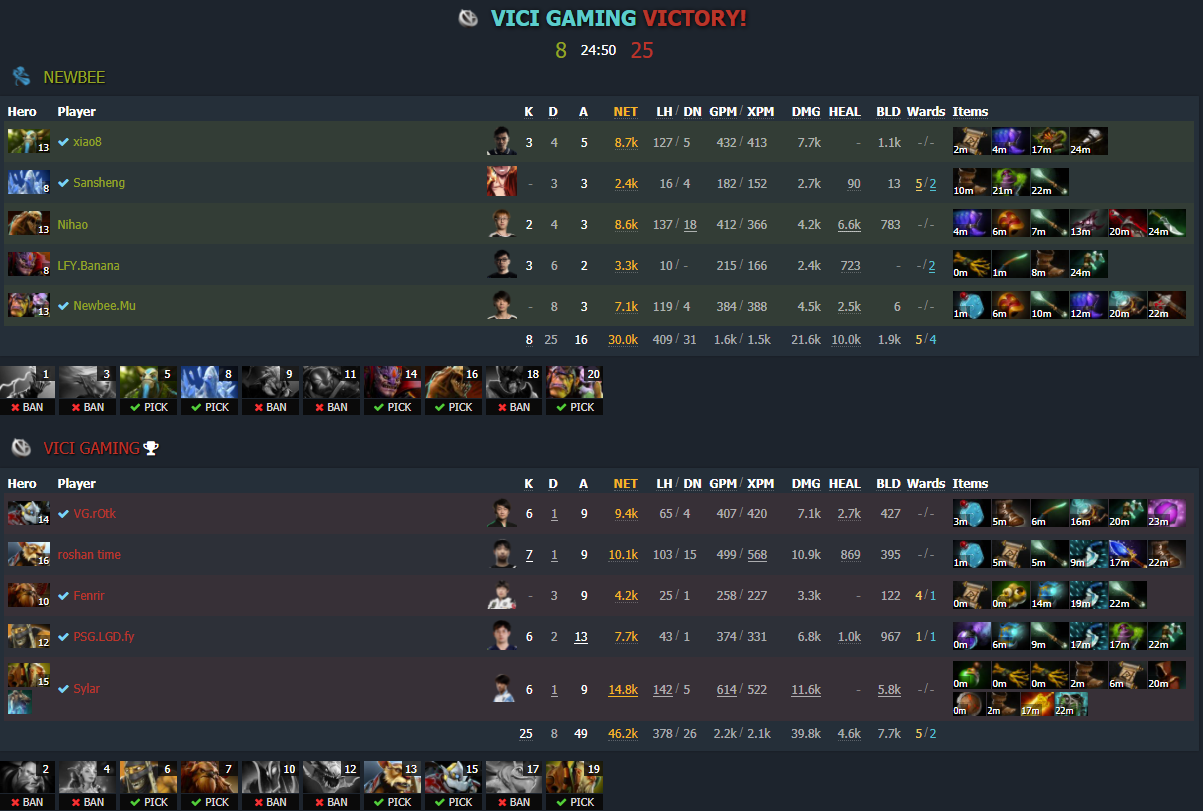 There is little to describe in each game specifically, as nearly all games had a similar theme. The team that got ahead stayed ahead, because

(1)    There was no comeback mechanic in that meta.

(2)    The tower gold had been buffed, meaning teams that got a jump on taking down towers added more gold to their coffers to help fuel the snowball effect.

One of the intriguing things that stands out is the use of Alchemist as a utility hero. Just a year ago at TI3, Alch had been a high farming position 1 hero, Na’Vi’s go to carry. But at TI4, his gold making ability was not really used to the fullest, and instead, he was used for his Acid Spray and Unstable Concoction and as a Mek carrier. Literally, Greevil’s Greed wasn’t till level 10 during that meta, which is unfathomable today! They didn’t have the Bounty Rune back then, but more importantly, farming a lot did not matter in deathball meta.

Vici Gaming took game 1 in just under 25 minutes in comfortable fashion to lead the series 1-0. 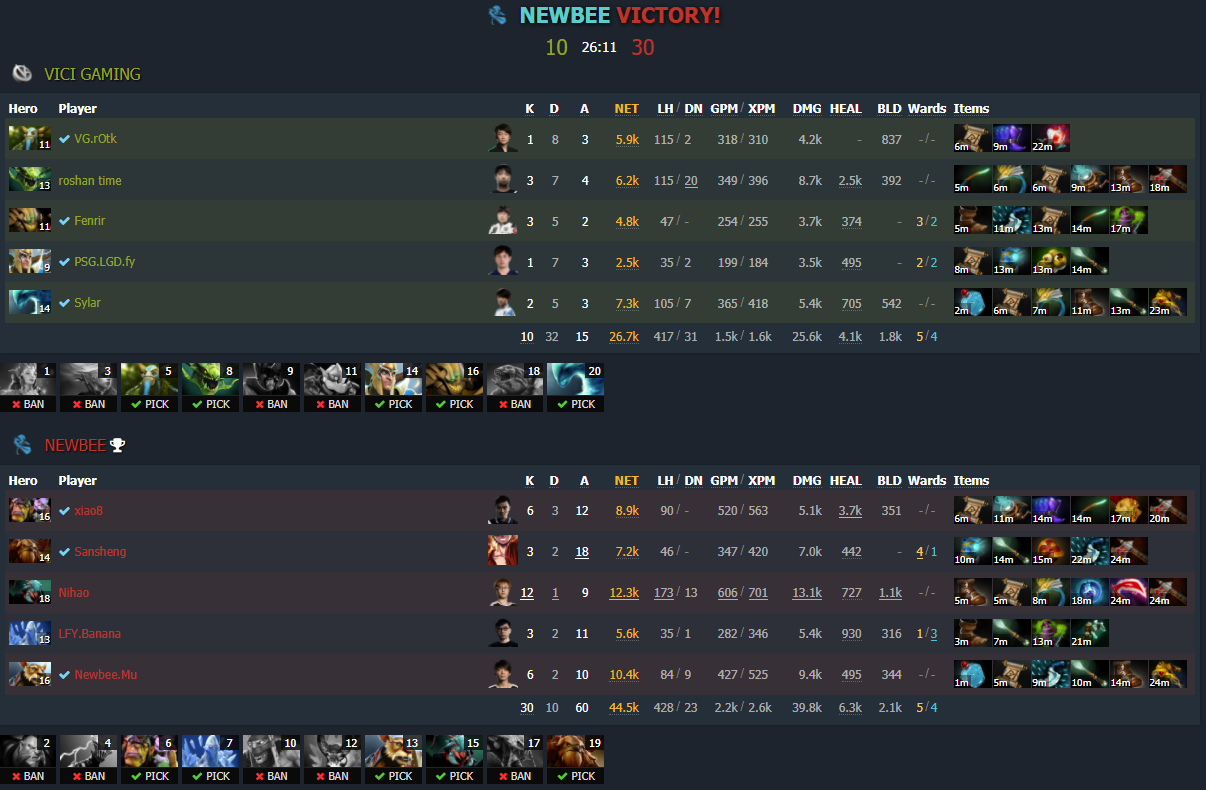 Game 2 was a similar timing game in the other direction, but the big difference was the fact that Vici Gaming threw in the towel before losing a single tier 3 tower.  In fact, this continued to be the trend through the rest of the series. 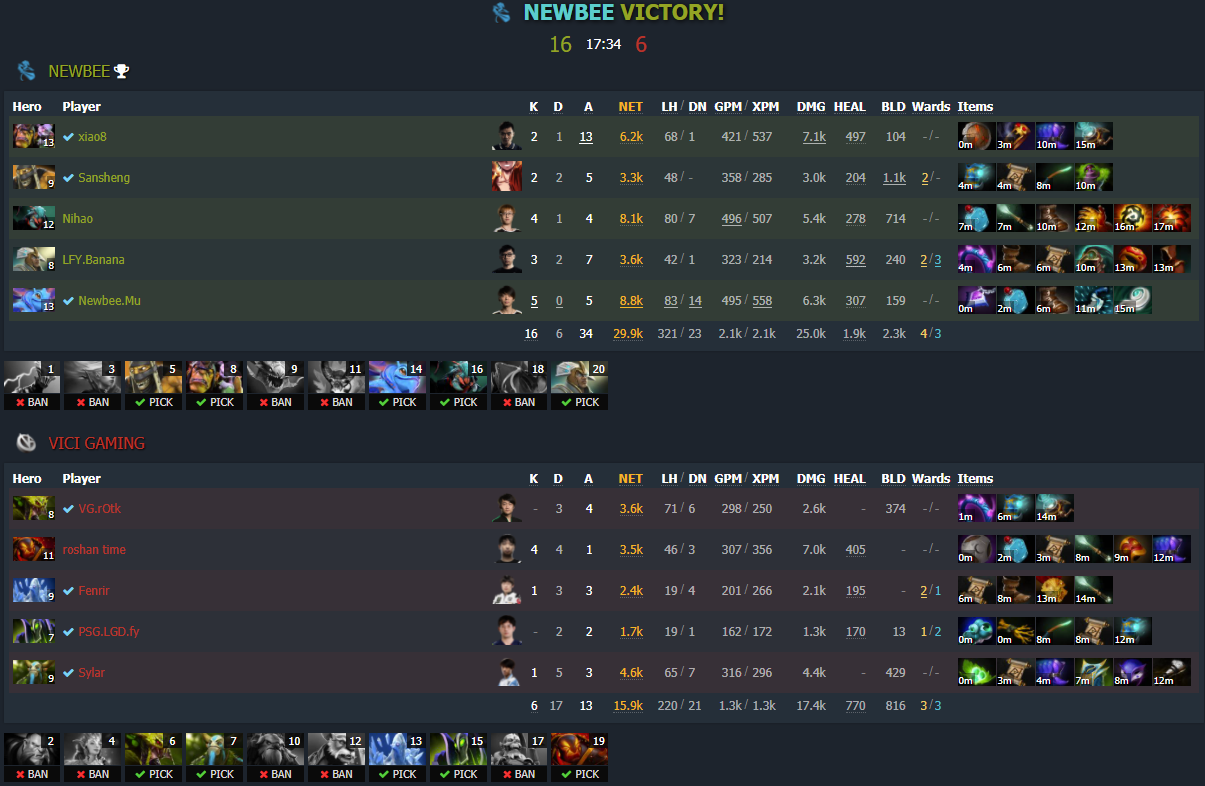 If games 1 and 2 were one sided, game 3 was a complete beat down of Vici Gaming by Newbee. Vici Gaming were considered the death ball experts and Newbee were more the ones unravelling Vici’s strategy, but it all led to extremely short, one sided games. The death ball either worked to perfection to take over the game, or failed in the early game to give the team absolutely no hope of making a comeback.

A common trend that can be seen in all games is every team prioritized a Mekansm, which was important for the sustain. A couple of fights early in game determined in which way the game would sway, and having a Mek made a huge difference in that decision. 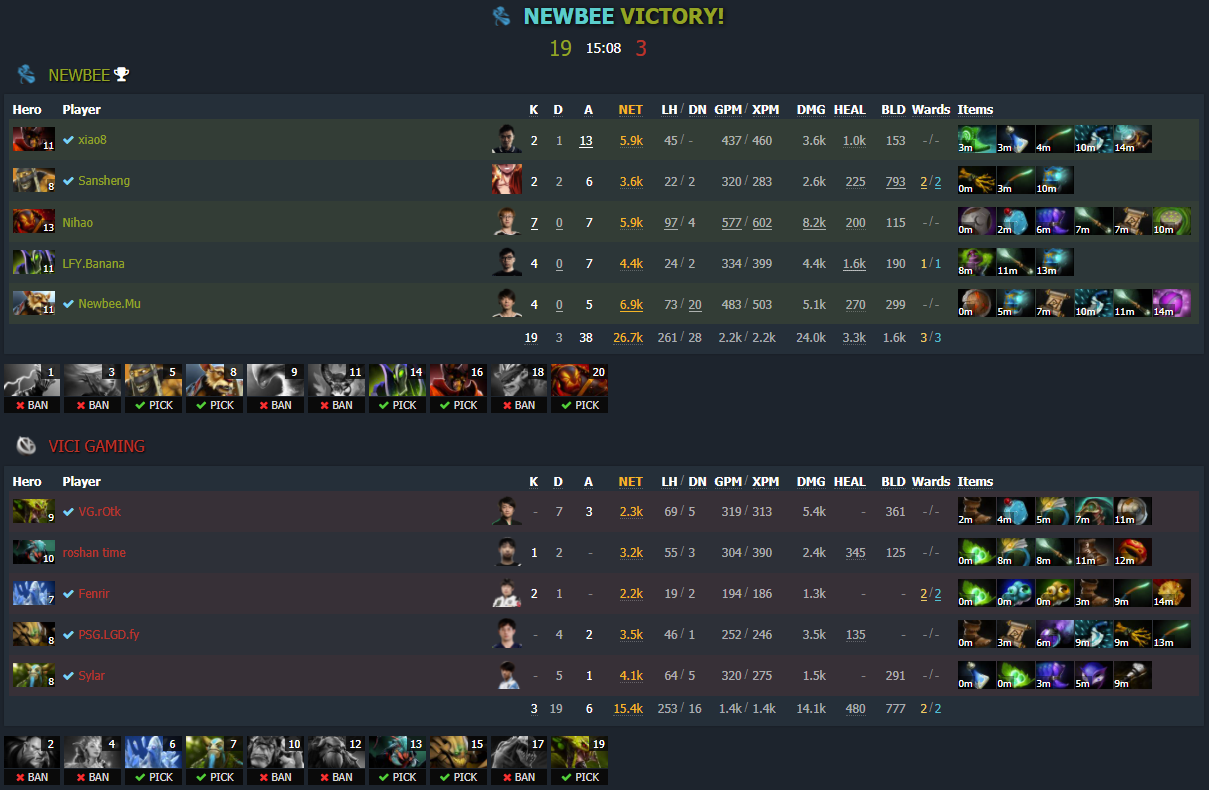 The excitement of games just kept dwindling, with the final game of the tournament ending in just over 15 minutes. Vici Gaming lost all lanes, and after seeing a last ditch attempt to win a team fight at their mid tier 1 tower, conceded to hand Newbee the title of champions of The International 2014. The game ended with Vici Gaming having all tier 2 towers standing, which is not something spectators wish to see.

Not only was TI4 the first time where the average team GPM of a team in the grand final went above 2000, it was also the first time where there was such a HUGE difference between the GPMs of the two teams. But it makes sense, right? The runaway team got more hero kills and tower kills, and that’s where all the gold was. Additionally, the passive gold income was also higher as compared to the previous TIs.

With that, we come to the end of the deep dive into the grand finals of TI4 to see how the meta and playstyle compare to that of today. TI4 was a major deviation from the years before it, especially the first two, where the game didn’t start until everyone had farmed their Vanguards! As it turns out, that was more interesting than seeing games end under 20 minutes. But IceFrog and Valve saw that and ensured that would not be the type of meta Dota 2 was harboring when heading into The International championships from there on out. Next week, we’ll take a look at the contest between Evil Geniuses and CDEC Gaming in the TI5 meta analysis. 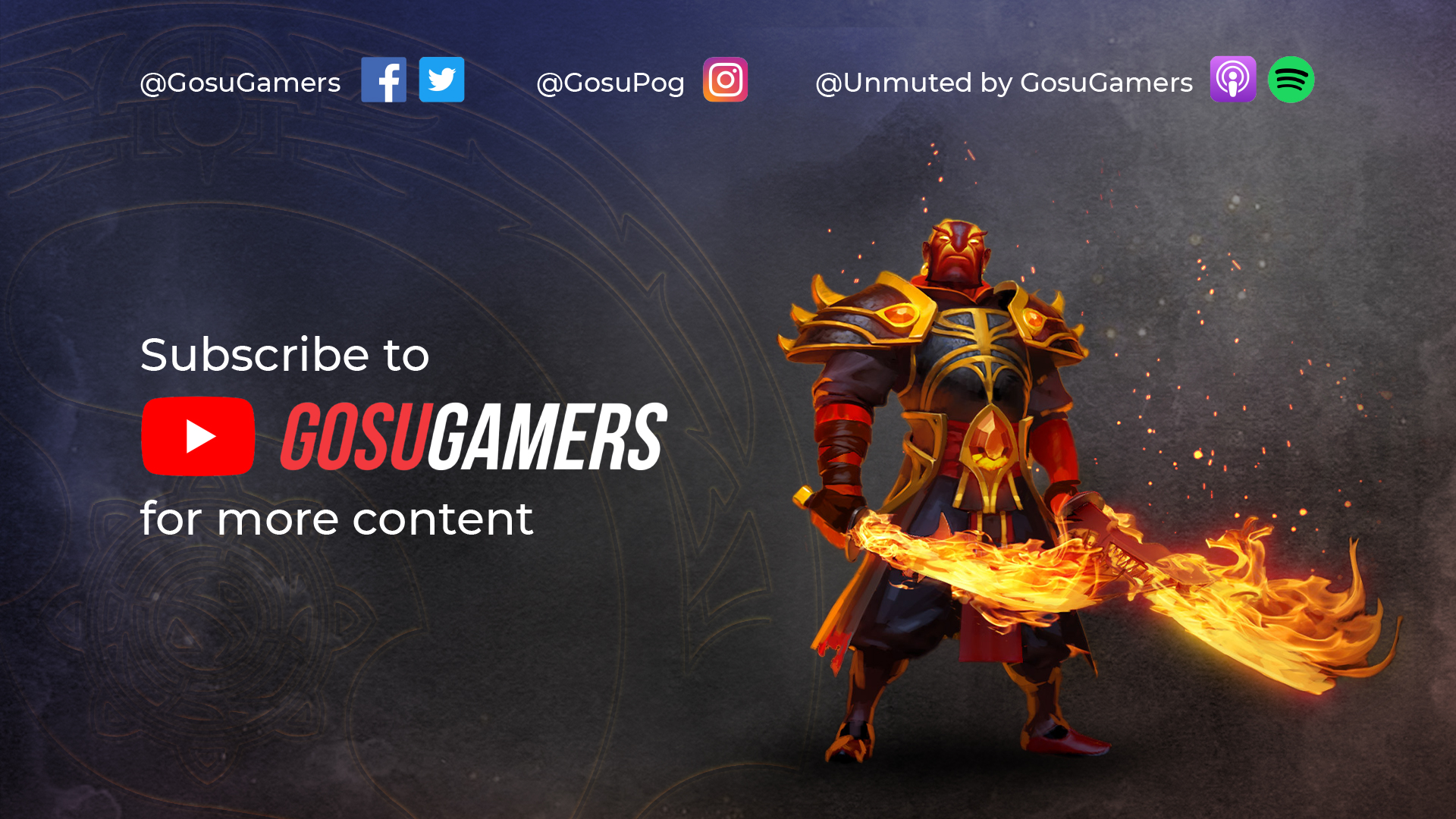 Was the death ball meta fun to watch?

Mushi interview: “Only after officially becoming a coach, I realized how important this role is”