TI4 journey so far: Story of the groupstages

For many reasons much of the early stages of TI were exactly what was expected. The Eastern teams dominated many of the games, most of the regional qualifier teams fell by the wayside, and Xboct didn’t miss an opportunity to feed at inopportune moments. Here he is eating arrows like a champ against iG:

Three of the top four teams were all Chinese by the end of the group stages, showing their patience, skill and dominance of the game at the moment. The only Western team to contest the top of the group was Evil Geniuses. They ended up putting in an incredibly good showing with a record of 11-4. Hot off their Grand Final at the ESL One in Frankfurt, EG continued to perform on the international stage.

One of the bigger twists in the group stages was EG’s American fellows Team Liquid who made it all the way through from the Regional Qualifiers to win the wildcard tournament and get a shot at the best teams in the world. On the first day Liquid managed to bag wins against big names like Team DK, Newbee and their rivals EG. Whilst being a renowned name in eSports and not a team to be underestimated, Liquid were nevertheless the wildcards. The fact that they put in such a good performance (better than some favourites like Empire and Alliance) was remarkable. The American underdog dream was not to be however, as they were relegated by LGD in the Bubble Bracket. The only blue they bled were tears as they were sent packing earlier than they would have liked.

A tough loss for Liquid. They spill out into the hall post game. #ti4 pic.twitter.com/ks8mDOUNPp

Unfortunately for Arrow Gaming, they were the first team to bow out of the competition, ending the their run with a score of 2-13. They were one of two representatives from the SEA region, which struggles for recognition as a region in the competetive Dota 2 scene. Their regional companions actually did much better, going all the way to the third phase bubble bracket to play against Newbee for their tournament life. They fought hard, made some new fans and showed themselves to be a worthy team for TI, taking Newbee to three games after an epic comeback in game two. They definitely are not down and out and will hopefully continue to provide a good representation for SEA DotA despite Arrow’s unfortunate performance. Here Resolut1on has a good time against them, pulling off one of the rampage’s of the group stages:

Despite Empire’s highlight reel clip, the hardened Russian team were underwhelming throughout their matches and finished near the bottom of the group on 6-9. As such a classic Dota team who were touted to be one of the higher finishers in the group, it was a shame to see them go out so early. They didn’t manage to convert their hallmark aggression and hero killing ability into the snowballs they needed to take games off the tougher opponents. Likewise, regional qualifiers Mousesports seemed deflated and broken after they got through to a tiebreaker matches to determine their fate.

A similar situation happened for TI3 winners Alliance who seemed to be figured out by the other teams. Their split-pushing from behind based play couldn’t bring them out of the group stages for a chance to contest their title. They lost four games on the first day of play, which really set the tone of the rest of their tournament. Against the tougher teams like Vici Gaming the Swedes just didn’t seem up to the challenge, getting caught out and having crucial heroes banned out against them.

Three time TI finalists Na’Vi put in a determined performance that put them in a comfortable position to go through to the main event. Cloud 9 also put themselves in a good position to qualify for the main event, having a shot at the upper bracket, but eventually being knocked down by the might of Team DK. After the internal troubles with Xcalibur and Era, Fnatic suffered the same fate as many of their European companions. The top teams proved to be too much for them to take on and they were eliminated with the somewhat frustrating score of 6-9.

As for hero picks and bans much of the strategy was in keeping with the meta of the current patch. Lycan took the top spot of combined picks and bans, largely because the hero was banned so much, as teams feared playing against the split-pushing and hero killing machine. Mirana was the most picked hero, as has been the case for a while now. She was seen mostly in the support role with stellar performances from Chuan and Fy. Interestingly there was a decent amount of play for Skywrath Mage who was maybe underpicked for a while, but ended up being the most picked hero on day one. This popularity eventually fell off and the hero ended the groupstages with only a mediocre 50% winrate. 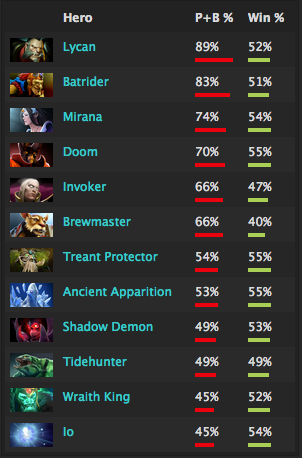 As we move into the final stages of TI, we will see if the story stays the same. We will see if number one seed, Vici and fellow top spots Newbee and DK will continue to deliver with their clinical style of DotA or if the few Western teams that remain will be able to pierce their armour. The journey so far through the group stages was impeccable Chinese dominance from some of the current best teams in the world, while everyone else tried to claw their through to a qualifying position.

It’s hard to say if these arguable underdogs Cloud 9, Na’Vi and EG will make a convincing attempt for the title, as Asian DotA has reigned supreme so far. But everyone loves an underdog.