C9 have picked Meepo again, this time against DK. I wonder how they will fare against DK who are running BurNing's Naga, something that has an extremely high win rate. At the same time DK will be running their greedy offlane and supports, which will be interesting since both teams go really late together.

OH MY GOD WHAT A GAME. IT WAS A SNOOZEFEST FOR 30 MINUTES BUT THAT LAST 5 MINUTES WAS AMAZING. I screamed myself hoarse with just one game. WHAT A GAME. The crowd is very clearly split along C9 against DK, but what a match. There's a lot of chattering now that the match is over, but the DK fans in the crowd are clearly elated over the ending of the match.

Wow, that was fast. 11 minute GG from C9, but so much less hype than the last match. That's all for today's matches, and that was also a really early end given how we all thought it would drag to yet another long match between the two teams after the first marathon match. That's all for today, and the DK fanboy in me gets to take a break until the main event for now.

C9 have drafted a Meepo for SingSing and immediately the match looks to be interesting. One of the heroes everyone has been looking forward to see since Fnatic made waves with Excalibur, this is definitely going to be an exhilarating match. Lunch has been served, but the match has been quite boring thus far. C9 have the huge advantage though, and people are laughing at Synderen's commentary more.

The Roshan fight that saw C9 picking up a huge advantage saw a large portion of the crowd eagerly cheering for C9's performance thus far - is it because of the Meepo pick or is it because they support EE-sama? I have no idea. C9 have taken the match though, and that means that C9 now have the advantage in the best of 3 to meet DK to fight for a spot in the winner's bracket. This is possibly the least consequential best of 3 of the entire bubble race, but it still matters. Who will win? 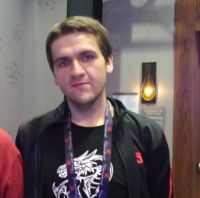 Game 2 is a really back and forth affair. The players have all started streaming in for lunch, since I guess this is the first day where mosxt of them do not actually have to play many matches. It's really hard to call who will win this match as yet, but LGD are really making a comeback after losing the early game.

What a comeback! That Slark pick did so much work and I think everyone here is happy to see the series go to a game 3. The applause for LGD is great, and I the hopes to meet DK are now pinned on the next game. I am looking forward to it. Over the course of the match I managed to speak to Dominik 'Black^' Reitner, who has been hanging out with DK for most of the tournament. He mentioned that he didn't think that DK's strategy video being leaked was a huge problem for DK, but it definitely did put them at a disadvantage. Hopefully that is the case, since I wouldn't want to see this becoming a huge problem for the rest of the tournament.

LGD have crashed out of the bubble race, and will be heading to the loser's bracket now. Next up we have C9 vs DK, which I believe will be an explosive matchup. Here goes!

This is the most high stakes game of the bubble race, I think. This match is easily worth 500k USD since that's the difference between 7-8th place and 9-10th place. WIth this in mind I can only begin to imagine the pressure on the players. I'm in the hall right now and it's emptier than before, with mostly personalities instead of players watching. I guess the players are sleeping in after a long and grueling group stage, and will come in later.

Game 1 has been taken by LGD following the success of their pick-off lineup, but cheering is sparse for either team: it seems that the personalities are less wont to cheer compared to the VIP attendees and such. Also, without the large group of Fnatic fans, a good large group is also missing from the audience.

There are more people in the hall now, and it seems really subdued since I believe most are cheering for Liquid. The only boisterous group is on the far side of the hall, who are cheering the Chinese team on. Something seems to be up with LGD who seem revitalised today - they are really dominating Liquid who had earlier been touted to be the Chinese slayers.

Liquid have been eliminated and there is polite applause from the crowd. But it seems that Liquid were just not prepared for this, and that's another American team eliminated from the tournament.