Mousesports - From dogs to mice, beware their bite

Mousesports, a European Dota 2 team that was constructed back in 2007, is a team that posesses several veteran players that are second to few in individual skills and experience. Their players, formerly identified as Team Dog, were contracted into Mousesports in May 2014 and have since proven themselves to be top contenders in the European scene. 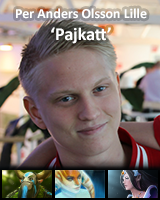 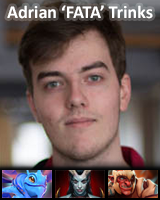 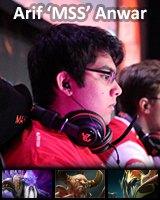 The history of Mousesports in Dota 2 is a mixed bag, with numerous roster changes, but no real success at the most prestigious tournament of all: The International. The organization made its first The International appearance in 2012, where they suffered defeat at the hands of EHOME in the losers bracket. Soon thereafter, the organization underwent several dramatic roster changes with players like ComeWithMe, Black^, KuroKy, and 1437 joining and leaving.

“
The one thing you’re looking for in a roster is stability, and to overcome some bumps and hickups as the time goes on. Stability is key to constant good performances in team games, so there’s no room for a ‘qualify or get out’ mentality in Dota 2.  ” -  Rene Lannte, Manager for Mousesports

Mousesports is the only European team who has qualified for The International via the qualifiers back to back. In 2012, the team fell one step short in the qualifiers, however, were chosen as a replacement team nonetheless. Having relatively less practice, the team managed to oust the Chinese team World Elite in a decider match, yet were unable to carry on the momentum further into the competition and were eliminated in devastating fashion.

Moving on to TI3, Mousesports acquired the services of Troels 'syndereN' Nielsen before the qualifiers. After initial hiccups, they managed to win the qualifiers and go to The International for a second time. However, failure engulfed the team yet again and they performed very poorly despite winning Raidcall EMS One Season 2 and placing 5th at Dreamhack Summer 2013 prior to TI3. Mousesports was unable to find their rhythm and were knocked out immediately managing to win only one game in the group stage before falling to LGD.int shortly after.

The poor results caused several roster shuffles with players starting to leave the team slowly one after the other. Fata left the team on a sour note and partly blamed syndereN on the strategic end. Black^ travelled to China whilst qojqva joined Team Liquid. Mousesports attempted to create an all Danish squad led by Synderen. Unfortunately, Synderen announced his retirement from Dota 2 as a player only two months later only for Mousesports to call it quits shortly after in January 2014.

“
Our goal is of course to perform well in every single tournament, but we won't let ourselves get affected by unpleasing results. We will prepare for every game and every tournament step by step  ” - Pascal 'paS' Lohmeier

Flash forward to May 2014, a few days prior to The International 2014 qualifiers. Team Dog, a European unsponsored team consisting of veteran players, caught the attention of the German organization. The team initially had only two of Mousesports five original players. However, Smulgullig, Demon, and Fogged moved on to other teams such as Team Liquid and Natus Vincere.US and were replaced with the rest of the Mousesports current lineup including former EG player MSS and former Sigma.int players FATA- and paS-. 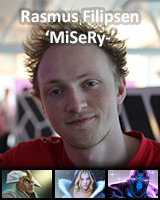 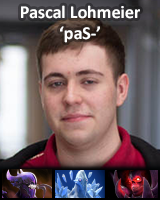 Team Dog found success in winning BountyHunter Series #3, multiple GIGABYTE Challenge series, and qualifying for ESL One hosted in Frankfurt at Commerzbank Arena. Recognizing their talent and skill, Mousesports officially picked up Team Dog in May 2014 prior to TI4 European qualifiers. Since the aquisition, Mousesports has bootcamped in Berlin and gone on to take fourth place at ASUS ROG Dreamleague Season 1, as well as punch their tickets to Key Arena, Seattle.

Despite their prominent reputation, there is one shadow that casts a pall over Mousesports, the event that they have thus far been unable to conquer. The International 2014 is shaping up to be the largest eSports tournament of all time. Finding success this year could bring redemption to past endeavors at The International, and once and for all prove that Mousesports is one of the premier Dota 2 organizations in the world.

“
I hope that we can stick together and keep up the focus and chemistry regardless of the outcome. Whoever can learn from their losses throughout the summer, will have a better shot at winning, as I see it. As it always has been, TI4 pretty much dictates dota 2 players career and years to come, so potentially it is more important than ever, as e-sports is getting very serious.  ” - Rasmus 'MiSeRy' Filipsen 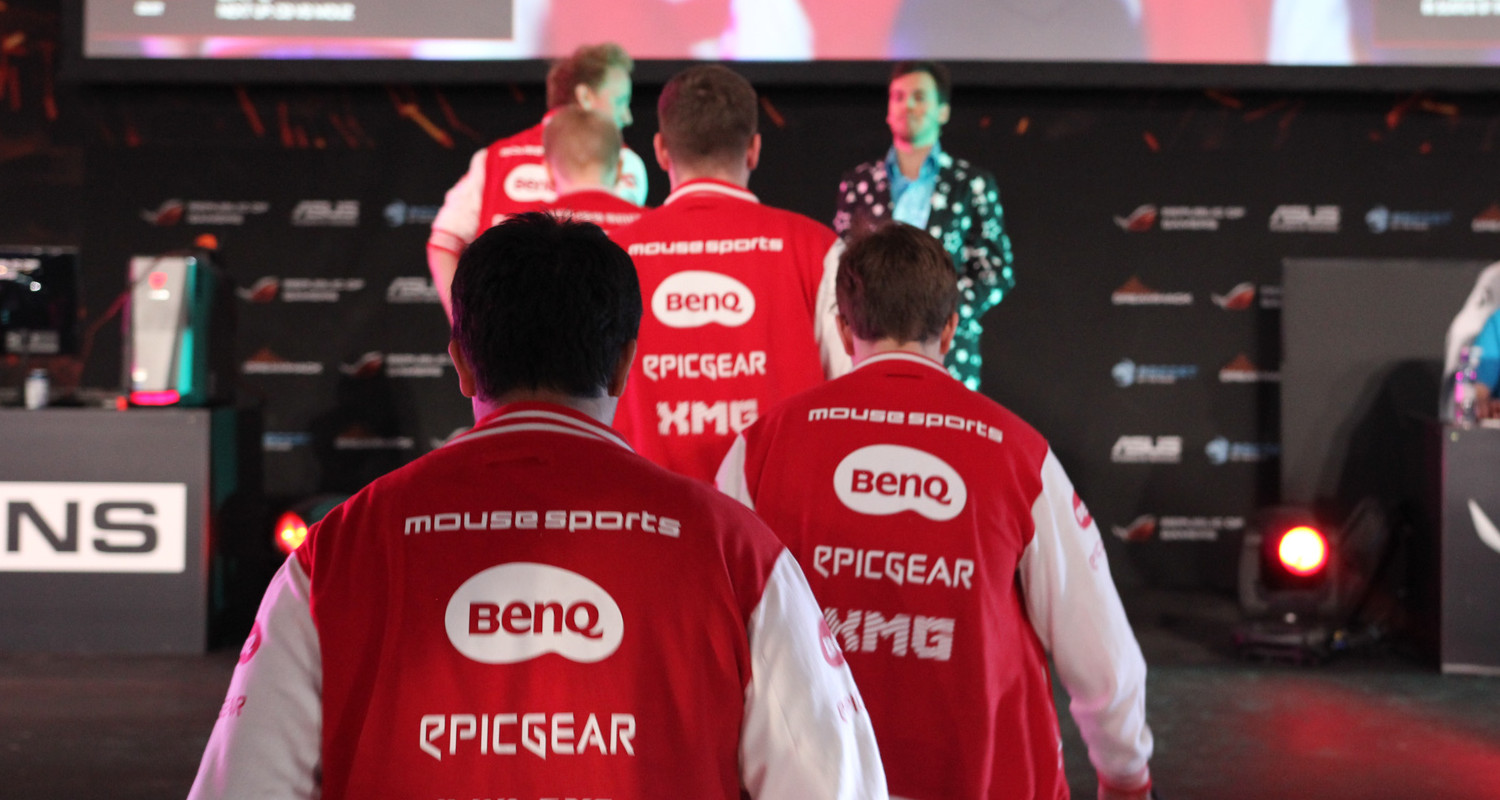 During their tenure as Team Dog, the team maintained an impressive 67% win ratio, going 46-3-20. Their achievements consist of winning GIGABYTE Challenge #1-3, Bounty Hunter Series #3, and taking third place at ESPL season 1. More importantly, they also managed to qualify for the ESL One LAN tournament in Frankfurt, Germany, set to begin June 28th. Since taking up the Mousesports banner, their win ratio is 66% with a record of 31-16.

Post acquisition, Mousesports has placed fourth at ASUS ROG Dreamleague Season 1, beating out Fnatic and the NA powerhouse Evil Geniuses. They also won American Dota League Season 2, came in second place in Bounty Hunter Koth #4, and third in Netolic Pro League #4 west. Perhaps most importantly, they managed to qualify for The International 4 in the European division qualifiers, where they defeated teams like Virtus.Pro and Rox.kis. This July, Mousesports will travel to Seattle for a stab at over 9 million in prize money. 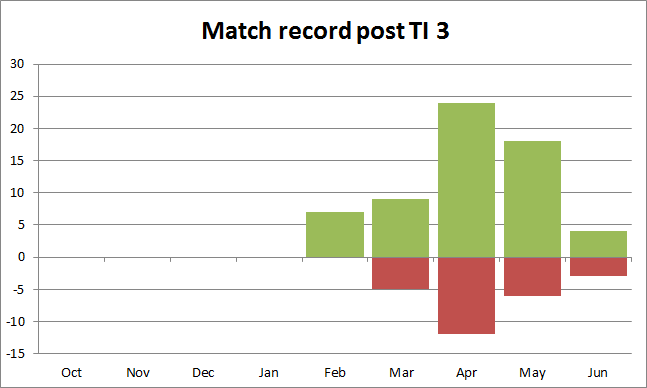 Post TI3, Mousesports found limited success with their old roster and disbanded. Team Dog, on the other hand, was successful in qualifying for ESL One, a LAN event that will take place in Frankfurt, Germany. The graphs above indicate that Mousesports has been doing quite well for themselves in the past few months, with an impressive 80% win ratio in May. 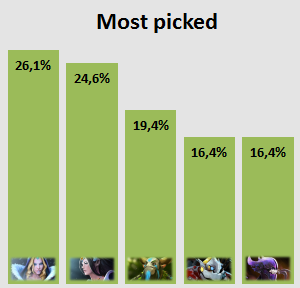 Team Dog in 6.80 favored certain heroes like Crystal Maiden, Rubick, Centaur Warrunner, and Mirana in their drafts. However, post 6.81 they upgraded their arsenal by picking up other, perhaps less orthodox heroes. Mousesports is unique in that they value particular heroes slightly more than other teams do.

One of the most prominent, recent examples of this is FATA's Troll Warlord, which he plays at middle lane. Their most picked hero, however, continues to be Ancient Apparition due to his powerful support presence.

In most games, FATA takes the middle lane with a tempo controller such as Invoker or Puck. Pajkatt, the carry player in the number 1 position, plays a relatively elusive carry hero like Natures Prophet, Mirana, or Slark. Since Mousesports tries to win their lanes and use the momentum to snowball out of control, they often employ powerful early game supports like Rubick, Ancient Apparition, or Bane to instill fear and gank opposing heroes. In the meantime, MSS plays the solo offlane 3 position like Batrider, Nyx Assassin, or Doombringer. MSS, a former middle lane player, is particularly good at acquiring farm for himself even against the most ruthless tri lanes. 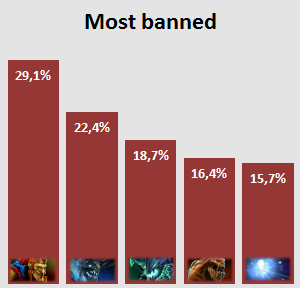 Mousesports most banned heroes are fairly typical, with heroes like Batrider, Mirana, Visage and Io near the top of their list. Since heroes like Batrider and Wisp are good at disrupting a teams formation and rhythm with pickoffs, they simply choose not to deal with it.

Despite Visage falling slightly out of the metagame, his high damage output in the early game has given Mousesports troubles in the past. They also frequently bans out gankers like Enchantress, to relieve some pressure off their lanes and solo players.

Although they are a force to be reckoned with, Mousesports rely on FATA- to a great extent. If the enemy shuts down FATA- at mid lane, the entire line-up struggles to recover.

-Misery and Pajkatt have played together since EG in 2011.
-MSS stands for MojoStormStout. Arif Anwar, due to disputes with his parents about his Dota 2 career, ran away from home to play with EG.
-Mousesports has qualified the past two years in a row for TI, without receiving a direct invite
-Besides Dota 2, Mousesports is also famous for SCII and CS:GO teams.
-Mousesports is a founding member of the G7 teams.
-Fogged and Smulgullig were removed from the team in favor of FATA and pAS, both players coming from Sigma.int.

Head over to our Mousesports and The International wiki page for more information!