“
Evil always turns up in this world through some genius or other. ” - Dennis Diderot 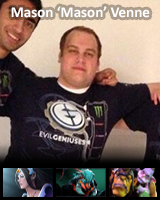 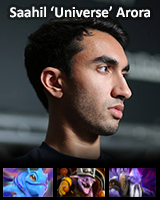 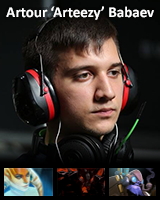 Evil Geniuses is one of the most well known names in professional gaming history. With superstar names like Maelk, Demon, and Fear playing for the team at one point of time or another, it may come as a surprise that until recently the Geniuses were yet to win a single championship match. Some have attributed this to the EG "curse", where the team was notorious for building up a large gold and experience lead only to throw it all away and lose. After a disappointing show in the western qualifiers for The International 3, Evil Geniuses decided to change up their roster multiple times with the acquisition of players like Fogged and UNiVeRsE. Nevertheless, continued poor performance led to a period of inactivity late 2013.

“
It's not what you say but what you do that defines you.  ” - Saahil 'Universe' Arora

Several months later, Fear and UNiVeRsE were spotted playing on a team identified as "S A D B O Y S" with new teammates Zai, PPD, and Arteezy. They immediately found success in the form of winning the ESP Shock Therapy Cup against Team Empire and accumulated a score of 16-2 before being officially dubbed the new Evil Geniuses.

It was only a matter of time before they proved themselves to be the strongest American team in the world.  With the acquisition of Artour "Arteezy" Babaev and two former HoN players Peter "PPD" Dager and Ludwig "Zai" Wahlberg, the team has undergone a frightening transformation. 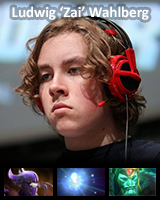 In just a few short months, they won several tournaments including the Monster Invitational LAN event where they defeated high caliber teams like Cloud9 and Team Liquid. Peter "PPD" Dager, the captain of EG proved himself to be one of the most intelligent and talented drafters in the Dota 2 scene.

“
I’m not looking to fill Fear’s shoes. I’m me. He’s him. I’m going to just be myself, play the way I play, and whatever comes of that … well, it is what it is. It doesn’t weigh on me at all. If people want to try to shoulder that on me for some reason, that’s their agenda, not mine.” - Mason 'Mason' Venne

A big hit came to EG in March when carry player Fear was diagnosed with mouse elbow, making him unable to attend EG's games. To fill the roster, Mason took over Fear's duties and despite many fans proclaiming him a worthy successor, Mason repeatedly stated that he does not wish to play full time competitively.

It wasn't until early June when Fear announced that he would be out for the rest of the season that Mason stepped up to the plate to join them as an official player. EG's  most recent test was the Starladder IX LAN finals, where they achieved a respectable third place with Jacky "EternalEnvy" Mao standing in for Fear. 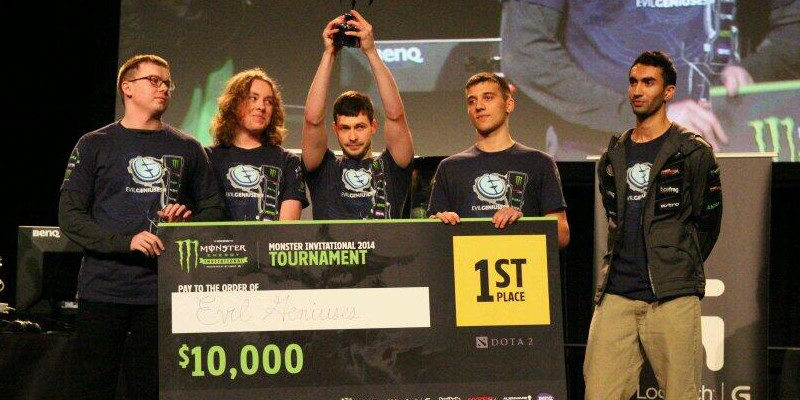 Evil Geniuses after winning the Monster Invitational 2014 tournament against Cloud9.

Statistics speaks volumes about how scary EG actually are. During their S A D B O Y S days, they maintained an incredible win rate of 88% at 16-2 in matches. Since taking on the EG banner, they have gone up to 63-2-78 or 81% win-rate. Mason himself has the highest win rate out of all Dota 2 professional players at 79%. Arteezy, on the other hand, has one of the highest average GPM in the world, sitting at 556. Nobody can argue that EG's preferred dual and tri-core line-up with Mason playing either a strong mid game or hard late game carry is producing results. 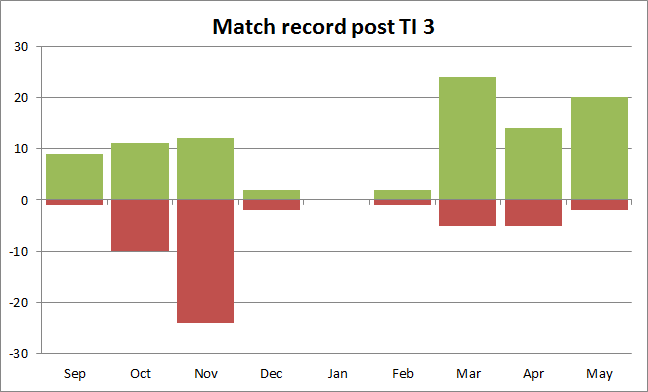 Taking a look at the graph above, it is evident that EG as a team has moved forward in a positive direction post February when they reformed. Prior to changing players, their performance was poor with less than a 50% win rate. In three months, their win ratio has skyrocketed to 77%. 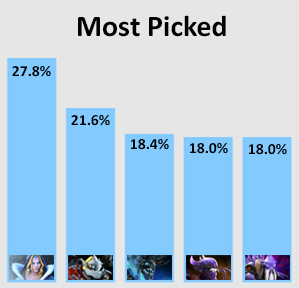 Drafting-wise, EG approaches most of their games with a particular strategy that can have several variations centered around different core heroes. The lineup is designed for the two carries to gather as much farm as they can while defensive supports like Dazzle, Shadow Demon, and Treant Protector roam to make sure Arteezy and Mason are safe. EG is also flexible enough to utilize dual lane strategies that usually use Treant Protector to maintain control over other lanes or roaming gank supports that look for kills all over the map. Despite flashy plays from Arteezy on powerful mid laners, UNiVeRsE is the backbone of team fights especially when playing heroes with clutch, momentum-shifting heroes like Batrider and Dark Seer. 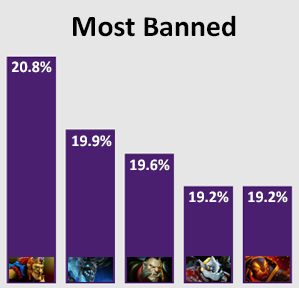 In patch 6.80, EG utilized supports like Crystal Maiden and Visage, but in patch 6.81 their most picked heroes were Batrider, Mirana, and Dark Seer. UNiVeRsE is known as one of the best Dark Seer players in the world, and Mirana is a stable safe lane carry for EG that rarely fails to get farm and maintain a mid game presence. Other heroes include Io, Treant Protector, Morphling, and Lycan. Even though many teams call the EG strat easy to predict, EG has ironically proven themselves to be incredibly flexible and uses one of the largest hero pools in the Dota 2 scene.

Due to their immense success, many teams in the North American qualifiers found themselves imitating EG drafts to an extent. Some of their most banned heroes in 6.80 were Batrider, Visage, Clockwerk, and Ember Spirit, while in 6.81 they prefer baning out heroes like Lycan, Treant Protector, and Sand King with runner ups Io, Dark Seer, and Batrider. EG tends to heavily prioritize the Batrider pick and have given it a 100% pick/ban rate in their past 38 games, while Mirana has an 87% pick/ban rate.

-Zai is one of the youngest Dota 2 players participating in The International 4 at the age of 16.
-Universe is also known as "Saahil O'Neal" because of his epic dunks, and his waifu is Misaki from Kaichou wa Maid-sama. Mason's is -Haruhi Suzumiya.
-Although Arteezy has never played Heroes of Newerth, both PPD and Zai started their professional MOBA career in HoN.
-Before becoming EG, they played under the name S A D B O Y S as an alternate tag. The idea was pitched by Arteezy.

Head over to the Gosuwiki for more information on Evil Geniuses and The International.