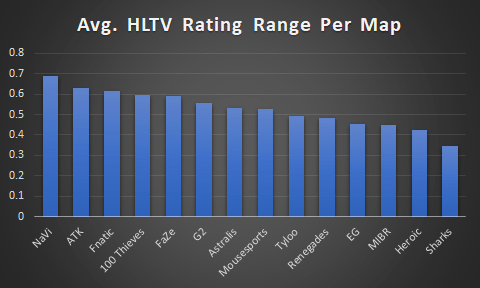 Data from all maps at ESL Pro League Season 10 Finals via HLTV.org

TLDR: This graph shows the average difference between the top and bottom players on a team based on their HLTV ratings after each map. Data is from ESL Pro League Finals a few weeks ago. EG players are remarkably close together and NaVi gets carried by Electronic and S1mple. This data has lots of possible error due to a few factors like sample size.

Musings: I took the range in HLTV ratings after each map for the ESL Pro League Season 10 Finals and averaged them for each team. Teams have different roles for their players so it does not mean that Sharks players are necessarily closer in skill to each other than NaVi players. Obviously there are a lot of possible places for error to pop up in this data. For one, the number of maps played by each team varies dramatically, from Fnatic's 17 to Sharks' 4. This will allow outlier games where a star player fails or carries really hard to impact teams that went out early. Additionally, the aforementioned team roles and strategy change what is to be expected from players. Finally, if a team gets wiped from the face of the planet by another in a map, there is less time for players to spread out in ratings on that map.

If you just look at teams that played 8 or more maps (Mouse, Astralis, EG, Fnatic, 100T, ATK, NaVi), there is a substantive gap between EG and the others with NaVi being comparatively way out in front. I had expected Astralis to be lower on the list but they appear only a little below average in this grouping. It would be interesting to see this data for a tournament that includes Liquid.

Thanks to HLTV for the data!

Hard Stuck In Silver after 1600 hours