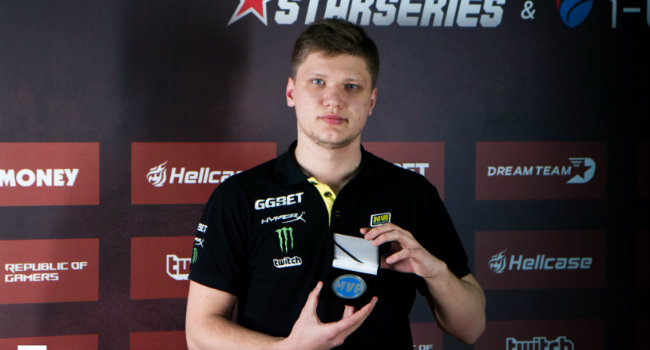 During the Starladder finals this past weekend, I flippantly mentioned to some colleagues that Aleksandr 'S1mple' Kostyliev was the Messi of Counter-Strike, if Messi played for my local amateur team instead of Barcelona. Football comparisons are as ubiquitous in esports journalism as they are unhelpful, but there is some truth to this one, I feel.

First of all, Simple, like Lionel Messi, is the best in his field. You can argue (and I’m sure Madritistas will) that Ronaldo is at least as good, but Simple currently has no equal. Who else can you realistically mention in the same breath nowadays? Coldzera is great, but he and his team have struggled to impress recently. And besides, he is surrounded by excellent team-mates. Similarly, Niko is part of a so-called superteam and looks unstoppable on his best form. But, like Cold, his best has been too rare recently.

Simple has neither of these drawbacks. His HLTV profile looks like something made up for some kind of fictional “best player in the world.” In commentary, HenryG mentioned that he was running out of adjectives to describe the young Ukrainian’s performance and I can relate. How do you describe someone this far ahead of his contemporaries? Short of poetry, how do you do him justice?

Scarily, he never seems to go missing. Niko and Coldzera both have their off days, but Simple almost always seems to put in a shift, even when his team-mates don’t. His stats during the final speak for themselves, as do the seemingly countless twitch clips. Don’t forget, he does quality and quantity. Some of the shits he was hitting against Mousesports would have had me scrabbling for the Report menu if they had happened in one of my matchmaking games.

The trouble is, Na’Vi’s other players fail to show up all too often. Look at the HLTV statistics for the Starladder final and this couldn’t be clearer. Mousesports averaged a rating of 1.02. No one player stood out above the rest; theirs was a team effort. Meanwhile, Simple’s four team-mates managed just 0.94 average rating, compared to his 1.56. He had 98 average damage per round, for goodness sake. How do you even describe that? Insane? Bonkers? Godlike? Nothing seems to do it justice.

Thorin tweeted that “the only people who can stop simple from winning are Na’Vi.” It sounds a little harsh, but it’s difficult to argue with. You can’t help but wonder what he might achieve if he wasn’t held back by the dismal performance of some of his team-mates. I hate to pick on individuals, but Zeus was 8-32 on Mirage – after 40 rounds. The fragging power of in-game leaders is a much debated topic in CS:GO, but you simply cannot win tournaments when 20% of your team is doing so poorly, not matter how good Simple is. If Zeus was bringing some kind of unbeatable, ground-breaking strategies to the table it might be a different matter, but he clearly isn’t. To say Na’Vi’s T-side tactics on Mirage were uninspired would be the understatement of the year. Rush B, boys, let’s go!

Again, it’s important to point out that Zeus wasn’t the only offender, but the contrast between his performance and that of Simple was stark. For every moment of brilliance from Simple, there was an equal and opposite instance of dismal failure from Zeus. It almost seemed like the latter was actively working against the former at times. I won’t be the first or the last person to point out the force buy round, in which Zeus – at his most wretched, on Mirage – kept an AK for himself, leaving his star player, in the form of his life, with an upgraded pistol. The mind boggles.

Na’Vi’s improvement in recent months is unquestionable, but something still isn’t right. When you have the best player in the world playing his A Game, you’re supposed to win tournaments. You only need to have the other four guys put in a C+ performance to have a chance of winning events. Granted, Na’Vi came as close as you can reasonably come, but it was all because of Simple. He carried a team that was shifting between D and F grades, depending on the map. Apart from Simple, a hypothetical school report card for Na’Vi would read “must try harder.”

Is S1mple the best player in CS:GO right now?